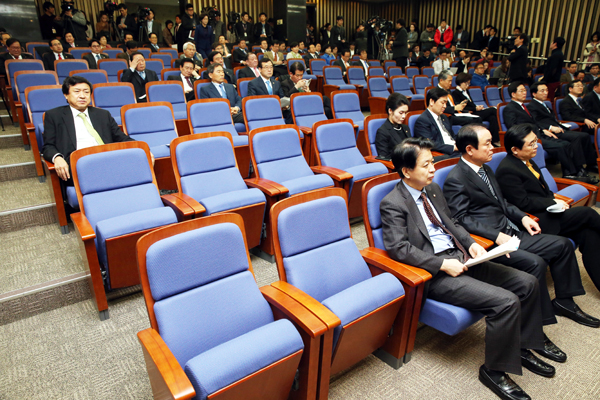 Empty seats are seen yesterday at a meeting of Democratic lawmakers in the National Assembly in Yeouido, Seoul. DP leaders convened with lawmakers to explain the process for the merger of Ahn Cheol-soo’s political camp and to seek lawmakers’ opinions on the process. [NEWS1]

Despite the fact that a flurry of crucial bills, including one concerning basic pension, remain pending at the National Assembly, the likelihood of another extra session following February’s appears slim.

With the June local elections less than three months away, lawmakers from both the ruling Saenuri Party and main opposition Democratic Party - which is set to form a new political entity with independent lawmaker Ahn Cheol-soo’s faction - appear to be more engrossed in waging political warfare.

Extra sessions can be held at any time for less than 30 days - in addition to the regular session held for less than 100 days starting Sept. 1 each year - should the president or a quarter or more sitting lawmakers demand it.

Currently, however, many of the Assembly’s key members are traveling outside the country.

Representative Choi Kyung-hwan, the floor leader of the Saenuri, is on a visit to Chile as a special presidential envoy and Yoon Sang-hyun, the deputy floor leader, is going to other South American countries as a member of the Assembly’s foreign affairs committee.

Choi will return to Seoul tomorrow and Yoon will arrive March 26. Approximately 80 lawmakers are already outside of Korea or are planning to go abroad this month, according to National Assembly statistics.

The Saenuri on Wednesday urged the DP to hold an extra session in March to pass the basic pension bill, arguing that the main opposition party is “fully responsible for breaking the March 10 deadline - the date the government and the Saenuri selected to give the government at least four months to prepare and register seniors [for the program so it could begin] in July, as it had earlier promised.”

Both parties continued wrangling over the revised basic pension plan but ultimately failed to reach an agreement in time on Feb. 28, the last day of February’s extra session.

Under the revised scheme, supported by the Saenuri, seniors who are not qualified for benefits from the National Pension Service (NPS), or those who have paid into their NPS accounts for 11 years or less, will receive the full 200,000 won ($187) a month. The DP, on the other hand, maintains that all seniors aged 65 and older in the bottom 80 percent income bracket should be entitled to receive a 200,000 won monthly allowance as a basic pension, regardless of their input into their NPS accounts.

Some Saenuri lawmakers have also set out to pass a revised bill on the physical protection of nuclear material and nuclear facilities, which they consider more urgent from an international perspective.

Even though Seoul hosted the Nuclear Security Summit in 2012 and led many countries to ratify important nuclear treaties - the amended Convention of the Physical Protection of Nuclear Material, for instance, and the International Convention on the Suppression of Acts of Nuclear Terrorism - Korea has failed to ratify those treaties because lawmakers have failed to pass related bills.

The biennial 2014 Nuclear Security Summit is set to take place March 24 to March 25 in The Hague, the Netherlands.

Bringing the amended Convention on the Physical Protection of Nuclear Material into force is one of the priorities of the upcoming summit.

Because the National Assembly did not pass those bills, President Park Geun-hye is on the verge of attending the summit empty-handed.

About 90 of 99 countries participating in the summit have ratified the treaties.

The Assembly completed reviewing the related bills for ratification, but the DP is still sticking to the principle that it won’t pass any other bills unless the Assembly first passes the controversial Broadcast Act, which would require an equal number of managers at broadcasting stations and their union members to discuss programming and scheduling.