Impact of FTA with U.S. measured after two years

Impact of FTA with U.S. measured after two years 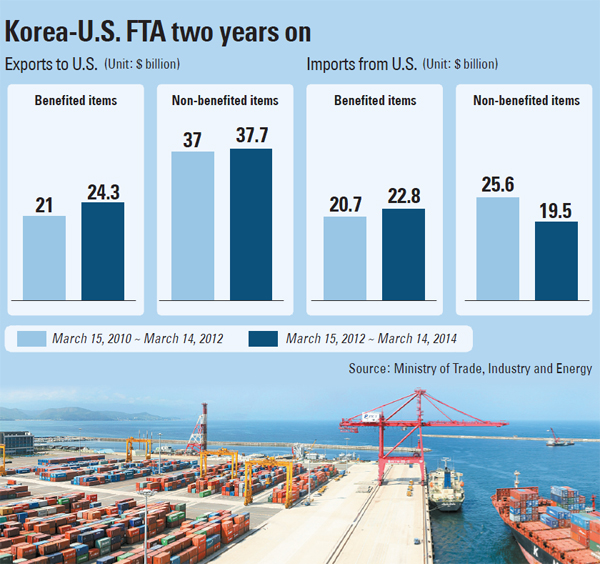 Korea’s trade with the United States over the past 24 months reached $205.4 billion as of Thursday, the eve of the second anniversary of the implementation of the free trade agreement between the two countries.

That volume is a 4.1 percent increase compared to the two-year period before the free trade pact took effect on March 15, 2012.

The government said the increase was made possible by the pact, as was a major jump in investment in Korea by the United States in the past two years.

The Ministry of Trade, Industry and Energy yesterday released an evaluation of the effects of the FTA, pulled from three trade-related agencies to commemorate its second anniversary.

“Owing to the two-year FTA between Korea and the U.S., Korean-made products are gradually expanding their presence in the world’s second largest market,” said the report.

Imports from the United States decreased over the last two years, down 2.8 percent in 2012 and 4.2 percent last year. The drop in imports was mainly due to the declining import of American crops and other manufactured products like memory chips.

Korean products that were exempted from tariffs, or had lowered tariffs owing to the pact, saw their exports grow 8 percent on average each year. Exports of products that did not benefit from lower tariffs rose about 3.2 percent annually, a large gap.

There are a total of 6,775 products benefiting from the bilateral deal, accounting for 63 percent of the country’s total exported items to the United States.

They include auto parts, transportation equipment, chemical and petrochemical products and electronics.

Among the products that benefited, Korea’s export growth of an average of 8 percent was notably higher than the growth of the same products from China (5.6 percent), Taiwan (4 percent) and Japan (3.2 percent), the ministry report said.

One of the biggest worries about the Korea-U.S. agreement was the opening of the country’s agricultural market, which sparked strong opposition from local farmers.

But U.S. crop imports dropped and Korea’s agricultural exports to the United States - fruit, vegetables, cattle products, processed food and wood products - increased by around 13 percent annually for the past two years.

The ministry also demonstrated that American automobiles benefited from the deal. Their tariff rates have been halved to 4 percent.

According to a separate report by the Korea International Trade Association, local businesses are increasingly using the FTA as a means to penetrate the American market. About 69 percent of local exporters benefited from tariff exemption or discounts in the FTA deal in 2012, and the figure soared to 76 percent last year, KITA said.

“The Korea-U.S. FTA has served as a buttress for the Korean economy to endure the global slowdown for the past two years,” said Myoung Jin-ho, a senior researcher at KITA. “Without the deal, it would have been difficult to achieve a 4 percent growth in trade. The United States is not a small market. It accounts for about 10 percent of the country’s total exports.”

The volume of incoming foreign direct investment from America was estimated to be $8 billion since implementation of the trade pact, an 82.5 percent surge compared to the two years before 2012.

The United States is currently the largest investor in Korea, claiming a 25 percent share of all foreign investment in the country.

“It is not right to say U.S. investment jumped that much solely because of the FTA,” the KITA researcher said, “but the agreement, for sure, has contributed to bringing in more investment.”

Before the implementation of the agreement, complaints circulated that its Investor-State Dispute (ISD) settlement clause was unfair, sparking serious concerns about potential lawsuits by U.S. companies against the Korean government when they made investment in the country. Some lawmakers called it a “toxic clause” and demanded renegotiations on the agreement.

At the time, the two governments said they would discuss whether the ISD would cause trouble or not by creating a separate discussion group.

According to an official at the Trade Ministry, the two are regularly monitoring any issues related to the ISD, and there is no chance of renegotiations.