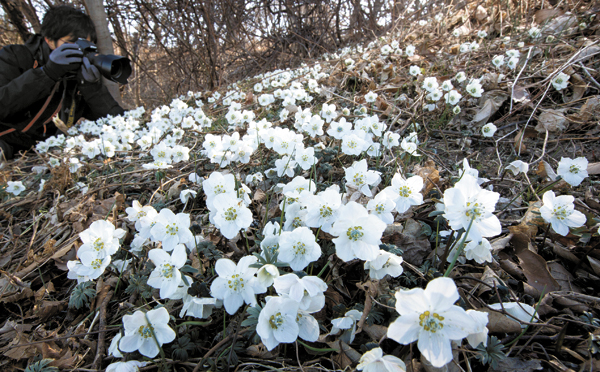 Pungdo wind flowers are native to Pung Island, a small land mass located in the West Sea. Locals say the wild flowers should be in full bloom by next week and typically wither by the end of March. By Ahn Seong-sik

Flowers often introduce the coming of spring with a much needed burst of color, especially following particularly dreary winters. In just a few weeks, azaleas, forsythias, magnolias and many more will be in full bloom.

So for something different and unique, a quick day trip to Pung Island, located in the waters off Incheon, is highly recommended.

Pung Island is home to all sorts of wild flowers. It has made a name for itself because of its extravagant flora, and spring is the perfect time to visit.

Nature lovers and photographers, whether professional or amateur, have swarmed here in recent years, regarding the island as a place for inspiration and creative pursuits.

With the advent of high-efficiency digital cameras, residents and tourists alike have honed their skills, turning to nature to practice their craft. And in Korea, there is no better place.

The island, home to about 110 residents, is also the one and only place where Pungdo wind flowers, scientifically known as Eranthis pungdoensis, grow and thrive.

Similar small white flowers are found in Byeonsan, North Jeolla, and many often confuse the two, though they’re distinctly different. The broad funnel-form petals of the Pungdo are much bigger than those of the Byeonsan, and their shapes tend to vary.

Controversies surrounding the blooms came to an end in 2009 when a botanist registered the Pungdo wild flower as a new species, citing that its qualities were dissimilar to the Byeonsan. The Korean Plant Names Index also recognizes it as a separate entity.

“Some people still consider Pungdo wind flowers to be Byeonsan wind flowers,” but that assumption would be incorrect, said Yang Jong-chul, a researcher at the Korea National Arboretum. 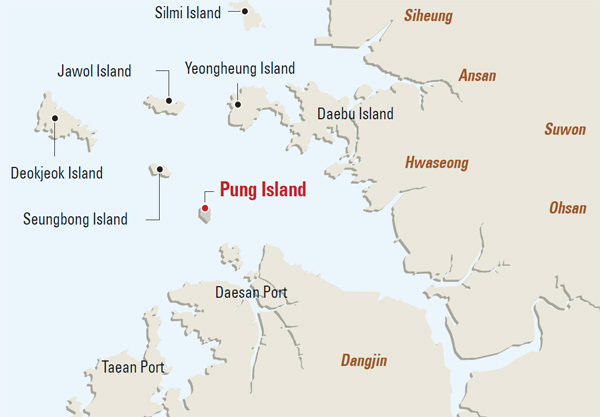 So as soon as I landed at the port of Pung Island, I immediately headed to Mount Humang, which stands about 175 meters (574 feet) above the sea level.

I trod past a 500-year-old Gingko tree and walked 10 more minutes until I came upon soil that seemed like it was dotted with coarse sea salt.

But they were, in fact, Pungdo wind flowers. The individual blooms seemed to be nothing special necessarily - just a small, common flower - but when they swayed in the breeze all together it was truly a magnificent, like a soft blanket of snow.

Most visitors, many laying close to the ground, were busy taking photographs, and some of them even shouted when they discovered particularly beautiful ones.

“I heard about Pungdo wind flowers from an acquaintance of mine, but they are even greater in person,” said Jung Hong-jun, 65, who was visiting the island from Buan, North Jeolla. “These wind flowers are much bigger [than those of Byeonsan], and the flowers are more overwhelming than anything else,” he added.

But according to locals, Pungdo wind flowers are not what they used to be.

Pung Island became renowned for its wind flowers around 2007, but fame always comes with a price.

“Some pluck the flowers after taking photos, or they trample them,” said Lee Kyung-wu, one of the residents here.

“We’ve tightened up monitoring since last year and also carry out campaigns, but we have much fewer flowers than we used to,” Lee lamented.

Still, the island is full of tourists, especially during March.

Last year, a thousand people came to the island in March alone to see its magnificent flora.

Apart from its blooms, the island also offers much more to enjoy around this time of year.

Earlier this month, the most common wild flower was the Adonis. 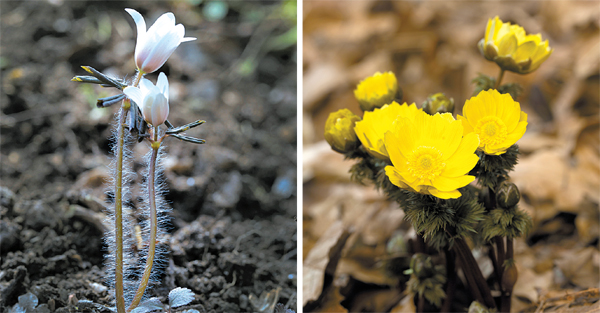 Left: The pheasant’s wind flower is a common sight at Pung Island. It looks pretty similar to the Pungdo wind flower, but it has a hairy stem, Right: The most common wild flower on Pung Island is the Adonis, which boasts a deep yellow hue.

Its deep golden yellow color is incomparable to the more muted amber hues of the forsythia and the Japanese cornel dogwood.

Liverleaf, with its hairy stem, has yet to be in full bloom, but they are still reliably pleasant.

The pheasant’s wind flower is another one that makes its way to the surface come spring. It looks similar to the Pungdo wind flower, though has hairy stems just like liverleaf.

Another wild flower native to Pung Island is the Pungdo daegeuk, or Euphorbia ebracteolata Hayata, which has pointy leaves.

Pungdo daegeuk grows on the northern stretch of the island, the most windy area.

Admittedly, searching for wild flowers amid thorny bushes was somewhat difficult. I had to watch my steps so as not to trample the flora, while keeping my face close to the ground to keep a vigilant eye.

But the strain seemed to pay off whenever I found one. Even though they’re tiny, they’re strong and formidable, having endured a harsh winter to be reborn.

But if you’ve had enough of the wild flowers on Pung Island, the next step is to ease your growling stomach. The island boasts a whole host of seasonal vegetables and herbs.

I stayed one night at Ki-dong’s Inn, where, I paid 6,000 won ($5.60) for dinner and got a feast full of local greens, including cow parsley and curly docks - rarities in the city.

And even if you don’t like flowers that much, there’s another way to enjoy this tranquil island: Go camping. The island’s pebble beach is the perfect spot for a night outdoors.

“Most visitors were here to see the flowers,” said Lee, the local resident, “but I see more people visiting the island with camping gear these days.” 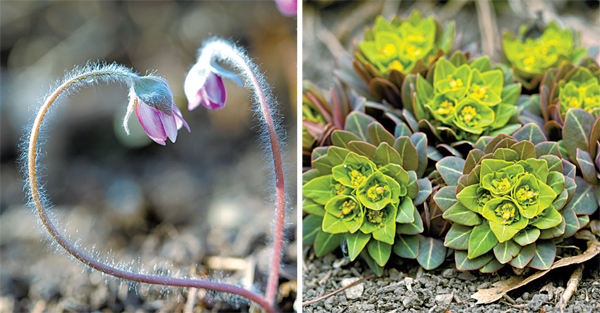 Left: Liverleaves also have hairy stems, but they have yet to come into bloom, Right: Pungdo daegeuk, or euphorbia ebracteolata Hayata, only grows on Pung Island.

It stops over at Daebu Island and arrives at Pung Island around 10:30 a.m. The last ferry for the day leaves for Incheon Port at 12:30 p.m., so most visitors usually take photographs for about two hours before departing.

All the inns on Pung Island are run by locals. There are about a dozen total and each has its own restaurant.

Those who visit the island are required to pay a 3,000 won per person litter fee - considered a sort of admission ticket to the island.