The female advisers to Kim Jong-un

The female advisers to Kim Jong-un 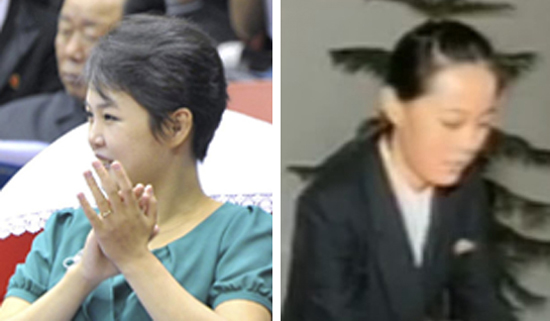 The female members of the North Korean royal family had previously been forced to live in seclusion, but they are slowly coming out of the woodwork now. Just two women stay close to Kim Jong-un these days: his sister, Yo-jong, and his wife, Ri Sol-ju. The two women, 25, have a mighty influence that no elite power can match. With her brother at the top of the chain, seemingly nothing can stop Yo-jong. Ri Sol-ju, meanwhile, used to be a singer and became first lady after capturing Kim’s heart when he was heir-apparent.

Their emergence on the political stage was dramatic. Their identities were unknown when they first appeared in state-run media, and just as curiosity peaked, they made their debuts. Kim Yo-jong first appeared at the funeral of her father, former leader Kim Jong-il, in December 2011. On March 9, her name was revealed as she accompanied her brother Kim Jong-un to the polling station during the parliamentary election. Her official title is chief official of the Workers’ Party’s Central Committee, which suggests that she will be in the front line of power from now own.

Ri Sol-ju was the Cinderella of Pyongyang, on the other hand. In early July 2012, she was sitting next to Kim Jong-un during a performance, which thrust her in the spotlight in Western media. Later that month, she accompanied Kim on his visit to the opening of the Rungna People’s Pleasure Park. It was at that time North Korean media introduced her as first lady Ri Sol-ju.

She was holding Kim’s arm publicly, and the couple wore matching watches. Ri wore a luxury handbag and a sophisticated hairstyle.

Analysts were initially puzzled about why she wasn’t wearing a portrait badge of Kim Il Sung or Kim Jong-il - a pin worn by Kim Jong-un and all party, government and military executives. Her public appearances contrast to Kim Jong-un’s mother, Ko Young-hee, who lived in seclusion until her death in 2004 in Paris.

Both Kim Yo-jong and Ri Sol-ju studied abroad. They have looked at Pyongyang from the outside. They should understand where the new North Korean leader should be heading in the third year of his reign and whether he is on track. The roles of the two women became more significant as Kim Kyong-hui, the leader’s aunt, retreated from the front line following the execution of her husband, Jang Song-thaek, who was once thought to be the second-most powerful man in the regime. After his death, no man has been able to fill that void.

Both Kim Yo-jong and Ri Sol-ju are also referred to as “comrades.” However, the comrades’ roles should not be limited to pleasing Kim Jong-un. But they should not exploit and enjoy power, either. They need to advise Kim Jong-un so that he takes care of the livelihoods of his people instead of focusing on ski resorts, golf courses or equestrian facilities for the privileged. We hope they can be “critical comrades,” for they are the only ones who can whisper honest words to such a reckless brother and husband.

The author is a deputy political editor of the JoongAng Ilbo.