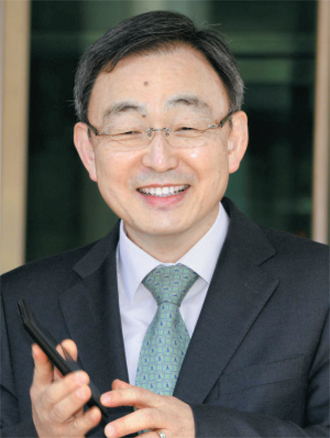 The appointment comes after persistent violations of the commission’s ceiling on smartphone subsidies by the three mobile carriers and business suspensions.

It also follows the failure of incumbent Lee Kyeong-jae to persuade the National Assembly to pass the Mobile Device Distribution Act at last month’s regular session.

“Such mobile device subsidy crises, in which people line up in the middle of the night to buy cheaper smartphones [with large subsidies], shouldn’t happen again,” the president said at the KCC’s annual meeting last month. “There will be some progress on these problems when the Device Distribution Act passes the National Assembly.”

Instead, lawmakers amended the act to prohibit disclosure of the subsidy amounts given by each manufacturer.

“We expect that the new chairman, being a judge throughout his career, will display more fairness when making decisions. Also, we hope him to be a wise mediator between pending issues and current laws,” said a KCC spokesperson.

Meanwhile, experts expressed some concern about Choi’s lack of experience and expertise involving broadcasting and telecommunications.

“This was quite a puzzling nomination. It’s like picking an ice hockey manager to coach a soccer team,” said Yoo Seung-hee, a Democratic Party lawmaker and member of the National Assembly Science, ICT, Future Planning, Broadcasting and Communications Committee.

“At the upcoming hearing, the rest of the lawmakers and I will thoroughly examine Choi to determine if he qualifies for the position in accordance with law and principle.”

Choi acknowledged his shortage of experience, but told reporters that there will be a role to play for a legal expert.

“The main task [of the chairman] largely deals with laws and is all about executing them. That’s why I assume that all jurists with more than 15 years of experience are eligible to be nominated as a commissioner,” he said yesterday.

“I don’t have deep knowledge about broadcasting or telecommunications, but I’m sure that my job as the commissioner is to prepare and implement policies on the same eye level as the subscribers, just like a judge gives a verdict from the people’s point of view.”

The Blue House issued a statement yesterday that it judged Choi to be qualified for the KCC chairmanship based on his leadership and decision-making abilities.

Choi was appointed as a judge in 1986 and served on the Patent Court of Korea and several regional courts.

If Choi is approved by the National Assembly in the hearing, which the Blue House will request next week, he would become the first jurist to serve as KCC chairman.