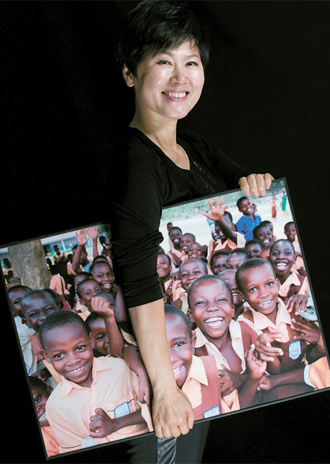 Han Bi-ya holds a photo of African children. “I’ll devote myself to relief work as long as I’m physically capable,” she said. By Kwon Hyeok-jae

In honor of International Women’s Day on March 8, the JoongAng Ilbo interviewed Han Bi-ya, a globally celebrated relief worker, refugee advocate and travel writer who in 2009 was voted one of the most revered Koreans in a poll of university students.

Han sat down for the interview earlier this month, enthusiastically opening the discussion with an anecdote from the salon she had visited on her way.

“I got a half-price discount!” she exclaimed, adding that the hair dresser had praised her “virtuous deeds.”

“I frequently don’t have to pay my taxi fares, either - but then again, I donate the same amount to [the global relief organization] World Vision.”

Han is an adviser to the UN Central Emergency Response Fund, a visiting professor at the Ewha Womans University Graduate School of International Studies and a travel author with nine books under her belt.

Her best-sellers include “March to the World, Off the Map” (2005) and “It Turns Out, It Was Love,” which each sold more than half a million copies.

Han’s fame picked up momentum in her earlier years, while she was working as the leader of World Vision Korea’s Emergency Relief Team from 2001-9.

She now recalls those days as some of the darkest in her humanitarian career, due in part to what seemed like the international community’s lack of initiative to help the world’s most vulnerable.

“People click their tongues, [it’s a] pity how spoiled children are these days,” Han said. “But they’re brilliant. When I’m walking down the street, they approach me with their hands filled with money, urging me to use it for those in ‘critical need.’?”

The following is a condensed excerpt from the interview:

Q. Where was your most recent business trip?

A. I was in Mali, in West Africa, form last August to January this year, where I was mainly involved in securing shelter, medical treatment and food and water supply. The civil war has displaced about 500,000 people.

You always seem to be full of energy. What is the source of your optimism?

I always look forward to a brighter future. Of course, I sometimes get worn out, especially when I return from the field. I spent an entire week just gorging and sleeping after my visit to Mali.

Looking back, did you ever face a slump?

My father passed away when I was in the eighth grade and my family suffered financially afterwards. After graduating from high school, I spent six years working all sorts of part-time jobs. It was then that I felt the sting of social neglect toward second-class citizens.

How does it feel to be idolized by so many students?

I can’t understand why so many of our young leaders dream to become “the next Han Bi-ya.” Why would anyone want to stop short to become a runner-up? I practically crawled to the position I stand in today, battling through harsh conditions - but it’s so different now. With more favorable conditions, I think everyone can excel past where I am.

Who do you look up to?

I admire the visage of Nelson Mandela, whose photo I hung up in front of my desk. The tranquility reflects so much positivity.

You’re a hiking maniac, I heard.

I see God in the mountains. The mountains are filled with insight, and it’s my haven to relieve the toxins I’ve built up in my everyday life. I’ve probably climbed Mount Bukhan about 1,500 times, and I recently launched my “100 Night Project,” which is my plan to sleep a hundred nights in the woods. So far, I’ve slept 16 nights.

People address you as the “Daughter of Baram [wind].” Do you have any other preferences?

I think I’m going to stick with the one I already have - but I want baram to mean “hope,” instead of the current “wind.” “Daughter” connotes a sense of growth potential, and I’m surely still growing. I aspire to become the daughter, auntie and grandmother of hope in the years to come.