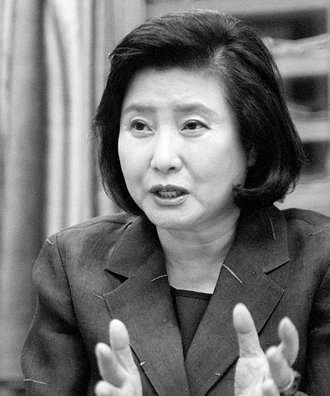 Lee, 78, has been active on the world stage, attending haute couture fashion shows in Paris.

“This museum is not vanishing forever,” Lee said. “I promise I will open up even a small museum later in New York again, when I get a chance.

Lee’s grandson is married to Korean actress Jun Ji-hyun, who is enjoying popularity in the drama series “My Love From the Star.”

On Feb. 21, the JoongAng Ilbo met with Lee at the last public event held at the museum.

Q.Why is the museum closing?

A. We have done everything we could financially. During the past ten years, I sold two houses of my own just to cover the operating expenses of this museum. While the monthly rent is around $5,000 to $6,000, the donations that I received per year were less than a month’s rent.

What made you establish the museum in the first place?

I decided to build it after doing a fashion show in 2000 here in New York. At the time, the 2,800 seats of Carnegie Hall were full. I did it because that was what made me happy. I was like a crazy woman.

Actually, I did not save money just because I wanted to establish and operate a museum. I wanted to study colors, learn more about sewing and see more fabrics for clothes. The museum itself was a teacher and a school. So I collected this and that for the exhibition. I have no reservations nor regret about the money and assets I spent.

Where is the collection of the museum going?

I am preparing a 990-square-meter (10,656-square-foot) space in Gyeongju, North Gyeongsang. It is not yet confirmed, however.

Why did you choose Gyeongju?

When I first built this museum, I sold my 1,650-square-meter house in Gyeongju. It feels quite strange and special to be going back to the place. All in all, I thought Gyeongju would be the best place for the museum, as many foreigners, especially researchers and artists, visit Gyeongju when they go to Korea.