Park will fly to Europe to attend nuclear summit

Park will fly to Europe to attend nuclear summit 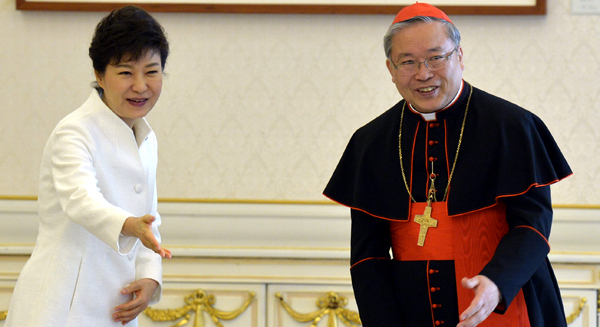 President Park Geun-hye will take part later this month in the 2014 Nuclear Security Summit, which runs March 24 to 25 at The Hague in the Netherlands, the Blue House announced yesterday. The president is also slated to visit Germany for four days as a state guest upon the invitation of President Joachim Gauck.

The trip to Europe is set to be her second overseas journey of the year following trips in January to India and Switzerland.

The multilateral nuclear summit, marking its third edition, follows the one hosted in Seoul two years ago in which leaders of 53 countries and four international organizations, including the International Atomic Energy Agency, gathered to discuss cooperative measures to reduce global nuclear terror threats and improve nuclear security.

President Park will deliver a keynote speech at the opening session on March 24 to “emphasize the joint responsibility of the international community in preventing nuclear terror and coming up with a direction for an international nuclear security system that is in line with the vision of a world without nuclear weapons,” the presidential office said in a statement.

Park will also have a meeting the same day with Mark Rutte, the Dutch prime minister, to discuss measures to expand cooperation on regional and local issues. She will also hold talks with Dutch King Willem-Alexander.

The Korean government is also set to forge a few memorandums of understanding in the business sector, a Blue House source acknowledged.

Park’s first destination in Germany will be Berlin. The key issues to be discussed in summits with German President Gauck and Prime Minister Angela Merkel will include trade, investment and, most importantly, unification.

“It is highly likely that President Park will come up with an important message concerning unification, given historical ramifications in Germany, [which is] a good precedent for Korea,” a Blue House official said.

Park reiterated the importance of a united Korea in January at the World Economic Forum in Davos, Switzerland, shortly after she told Koreans for the first time in her New Year’s address that the unification of the Korean Peninsula would be the “jackpot.”

“President Park’s visit to Germany will be a crucial opportunity for Korea to step up and deepen the friendly relationship that stretches nearly 130 years with the EU’s biggest economy and to share Germany’s unification and integration experience to form a basis for unification,” the presidential office said in a statement.

The final destinations on her six-day itinerary include Dresden, a city that formerly belonged to East Germany before unification, and Frankfurt, where many Korean-Germans live and Korean enterprises are based.

The occasion was to celebrate Cardinal Yeom’s elevation from archbishop and to discuss preparatory steps for Pope Francis’s trip to Korea in August, according to the Blue House.

“It was the Korean government that invited the Pope, and if he comes, government-wide support will be provided. The lunch was organized at the request of the Catholic Church’s preparatory committee .?.?. which wanted to show its gratitude to the government,” said Blue House spokesman Min Kyung-wook.