The cougar and the pianist

The cougar and the pianist 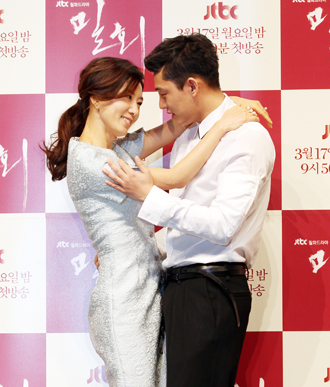 A racy affair between a brilliant pianist in his 20s and a successful career woman in her 40s is sparked when the man passionately plays a piece by Bach. Eventually, the two sit side by side at the piano and finish the music together - and neither look back.

This zestful scene is from JTBC’s latest drama “Secret Love Affair” starring Yoo Ah-in and Kim Hee-ae. It is a story about poor, talented and passionate pianist Lee Sun-jae, played by Yoo, and art foundation director Oh Hye-won (Kim), who become intertwined in an inappropriate relationship.

At a press conference held at the Hoam Art Center in Sunhwa-dong, central Seoul, on Wednesday, the two actors talked about what it was like to play their roles in the drama.

“I have acted with actresses who are a lot older than me before,” said Yoo, “so I didn’t feel that much pressure. Before the camera started rolling, we were in a senior-junior relationship, but as soon as the shooting started I considered my partner as a woman. When I get used to it, I can undertake very natural physical touches too.”

Kim said that while she has never felt an attraction toward a younger guy before, after acting with Yoo, her standards for men seem to have broadened.

The drama’s producer, Ahn Pan-seok, said he was impressed by Yoo’s acting skills, especially when he had to impersonate playing the piano.

“At first, I thought about hiring a substitute actor or getting some help from computer graphics,” said Ahn. “But the actors not only performed well with their body movements, the movements of their fingers were impressive, too. Even the experts could not tell that the actors were faking it. I appreciate actors who endured the pain of memorizing those complicated pieces of music.”

And while the title and teaser images suggest that the drama will contain a lot of risque scenes to build up such a controversial relationship, Kim said there was more to it than mere raciness.

“Hye-won is someone who lives not for herself, but for others,” said Kim. “She lives up to the expectations that others impose on her. And while living that way, she encounters Sun-jae, who has a passion that she once had. The love they share is more about satisfaction in life, not just physical satisfaction.”

When asked if she wasn’t worried that the age difference might show too clearly on TV screens, the 46-year-old actress said “It’s hard for me not to worry about it. But how can a 40-something woman not differ from a 20-something man? I try to keep calm by thinking that it’s natural to show the age difference.”

“Secret Love Affair,” which starts tonight at 9:50 p.m., will be a second team-up for Kim, Ahn and screenwriter Jung Sung-joo after the JTBC drama “A Wife’s Credentials” (2012).