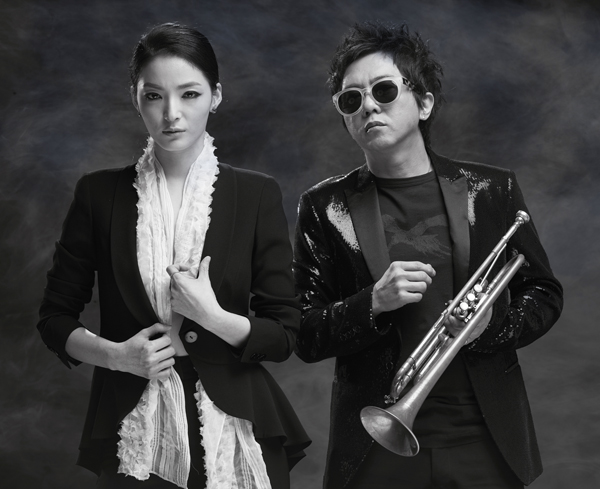 Korean pop jazz duo Winterplay, made up of Moon Hae-won (left) and Lee Ju-han, will hold a concert April 6 at the LG Arts Center. Provided by Loudpigs

Jazz in Korea is not the most mainstream genre of music. It’s certainly not popular. For many Koreans, the word “jazz” equates with “difficult.”

So what’s a Korean “pop jazz” group like Winterplay to do?

But the members of Winterplay - Lee Ju-han, 49, and Moon Haewon, 30 - say it’s only the term “pop jazz” that’s unfamiliar to Koreans. Their music is the same genre as the songs of Michael Buble and Norah Jones. In fact, many Koreans are already fans of Winterplay, they just don’t know it. That’s because the group’s song “Happy Bubble” was used for a television commercial for Samsung’s Hauzen washing machine. Other songs have similarly been used on TV.

In Winterplay, Lee produces the music, writes it and plays the trumpet. Haewon is the vocalist and helps to write the lyrics as well.

“Koreans imagine that pop jazz will be as difficult as jazz, but the concept of Winterplay is actually nothing new abroad,” said Lee. “Our music is unique and our style is unique, but the genre itself is nothing new. Take for example a group like Steely Dan. Koreans see them as popular artists, but they are 150 percent jazz musicians and they do popular music. More recently, we have Norah Jones and of course Michael Buble. There are so many artists who are between the lines of jazz and pop music. It’s just that in Korea, there’s only one, and that’s us.”

“It’s true that the identity of Winterplay is somewhat ambiguous in Korea,” said Haewon. “We are like the betwixt and between. It’s difficult to categorize the music we do as pop or jazz. But we see ourselves as two musicians who perform diverse genres of music with jazz elements.”

In the seven years since the group was formed, Winterplay has been more active overseas in places like Japan and Hong Kong than in their home country. The duo’s song “Shake It Up and Down” took the No. 1 spot on the international chart last month on Commercial Radio, a popular radio station in Hong Kong. Names like Beyonce, Bruno Mars and K-pop stars like Super Junior, Girls’ Generation and Girls Day all trailed behind Winterplay on that chart.

Looking to boost its popularity in Korea, Winterplay is holding a “nonstop jazz concert” on April 6 at the LG Arts Center. It’s the group’s first solo concert in three years and its first with its new agency Loudpigs.

To learn more about pop jazz and the coming concert, the Korea JoongAng Daily interviewed Winterplay last week at their agency’s office in Itaewon-dong, central Seoul. Here are excerpts from the interview.

Q. In your opinion, where do you think jazz is situated in the barometer of popular music in Korea?

A. Haewon: I think it’s a global trend that people don’t really listen to jazz as much they listen to pop music. In Korea, especially, jazz is the minor of minorities. But, you know, jazz has been with us for quite a long time as well. We had it even before independence. When Koreans think of pop music now, they think of dance or ballads, but some jazz music from a long time ago was considered pop music, like Hyunmi’s “Night Fog.”

Lee: Music in Korea is greatly influenced by American music. There were great jazz songs that people don’t even realize were jazz. I’m not a historian, but I guess after the Korean War, the situation changed and we encountered an era of rapid development, so the whole jazz culture subsided. When the situation settled down a bit in Korea, jazz musicians at that time probably felt it was so difficult to revive the jazz fever by themselves, and slowly what we now call pop music, like dance music and ballads, began to proliferate. Winterplay’s role, therefore, is trying to do what our first generation of jazz artists did, but in our own way, with our own color.

So you think jazz could become popularized in Korea?

Haewon: Certainly. I used to be absorbed in pop music. But one day, I had to prepare a jazz ensemble at my university as part of my course work. I’d never heard jazz music before that time. It was lucky for me I guess that I had no choice but to experience jazz that time. The more I listened to jazz music, the more I was captivated by its charms. I believe I had the same ear of most people, who are more familiar with pop than jazz. But I fell in love with it and so can anyone.

Lee: I think even our previous agency didn’t know how to brand Winterplay. We do pop music with jazz elements, so they categorized us under jazz. But when you listen to our songs, some of them are far from jazz. They may sound jazzy, but they are certainly not jazz.

Then how do you define Winterplay, in your own words?

Haewon: When people think of Winterplay, they regard us as jazz musicians and imagine that everything we do will be jazz. But when you listen to boy group TVXQ’s new song, the music suddenly changes to jazz in the middle, but no one regards the song as jazz. It just includes jazz elements. The same thing applies for Winterplay. We do pop music but with jazz elements. Rather than approaching the audience with one specific genre of music, we just want to be musicians who do music that makes people relaxed, happy and sometimes comforting as well.

Tell us more about your coming concert. Why did you name it “Nonstop Jazz Fever”?

Haewon: We have so much to show to the Korean audience. Winterplay has gone through many transformations over seven years, releasing three albums. But Korean audiences imagine our music will be always laid back and very jazzy. But we can be very entertaining and exciting as well. At some point, we even make the audience stand up and enjoy the rhythm.