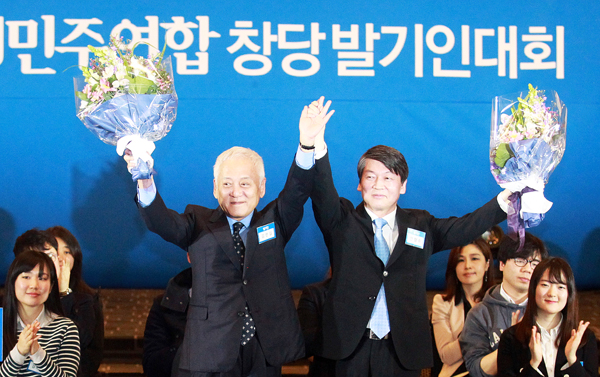 Kim Han-gill, left, chairman of the Democratic Party, and independent lawmaker Ahn Cheol-soo, right, respond to supporters yesterday at a convention of founding delegates at the Sejong Center for the Performing Arts in Jung District, central Seoul, after they were elected co-chairs of a committee to create a new merged party. By Kim Hyung-soo

The merger between the main opposition Democratic Party and followers of software mogul-turned-lawmaker Ahn Cheol-soo progressed to the point of agreeing on a name for the new political force.

The rough translation is New Political Democratic United Party, although the party had yet to agree on an official English name as of press time yesterday.

But reflecting the tight schedule before local elections less than three months away, the party’s principles, policy platform and regulations are still a work in progress, even after a meeting of 600 founding delegates yesterday.

“The New Political Democratic United Party symbolizes mutual respect and cooperation between the two groups [the DP and Ahn’s camp] and embodies both the demand by the people for a new type of politics and the traditions and history of the Democratic Party,” said Park Kwang-on, a spokesman of the DP at the National Assembly in a joint briefing with Keum Tae-sup, Ahn’s representative.

The two announced that the new party will use sea blue as its official party color. The DP’s current color is a slightly darker cobalt blue.

The two said in a joint statement that the new party will decide on its core principles and policy platforms before the inauguration of a party organization on March 26.

Ahn, who was elected to the National Assembly last April as an independent lawmaker, was in the process of forming his own party, which was to be named the New Political Vision Party, until earlier this month.

In a turnaround that few anticipated, Ahn announced on March 2 with DP Chairman Kim Han-gill that he and his followers would join a new merged party with the DP even before his party was actually formed.

During the convention of founding delegates yesterday at the Sejong Center for the Performing Arts in Jung District, central Seoul, DP Chairman Kim declared the upcoming party’s top goal is to win ruling power in the 2017 presidential election.

He said launching the new party was a “starting point of a journey toward the change of governing power in 2017.”

Of the 600 founding delegates, 324 came from the DP and the rest were from Ahn’s side. Former DP presidential candidate Moon Jae-in was among the 324.

It was speculated that there will be an internal power struggle among DP factions, especially between DP members who served under the Roh Moo-hyun administration and those who didn’t. Moon leads the Roh faction.

Tensions within the opposition were highlighted Thursday when Representative Cho Kyoung-tae, one of the DP’s leaders, said that pro-Roh members and pro-North Korea figures should not be allowed to join the new party.

It remains to be seen how the DP’s factions and maverick lawmaker Ahn will work together to share power in the new party.

Following the naming of the party and the convention of its delegates, conventions will be held nationwide starting from tomorrow in Gyeonggi.