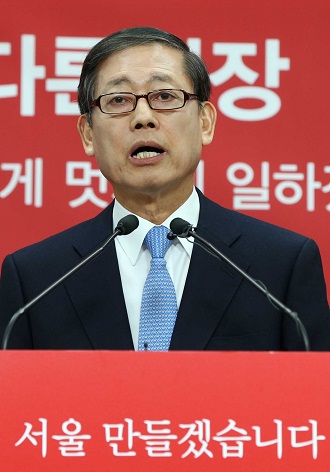 Former Prime Minister Kim Hwang-sik formally announces his run for the Seoul mayoralty yesterday at the headquarters of the ruling Saenuri Party in Yeouido, Seoul. By Oh Jong-taek

Former Prime Minister Kim Hwang-sik formally announced his run for the Seoul mayoralty in the June 4 elections, vowing to give hope to Seoul citizens and transform the country’s capital from “a city of despair.”

“Seoul is not a city of hope anymore, but a city of despair that is losing economic vibrancy,” said Kim during his declaration at Saenuri headquarters yesterday in Yeouido, western Seoul.

The 66-year-old contender said people in Seoul are not leading happy lives, citing a high suicide rate, and that he is determined to once again give people a sense of hope.

“I will walk down a path without hesitation to transform Seoul and make people living here happier,” he said.

Kim will have to win the Saenuri party primary and his main challengers are seven-term lawmaker Chung Mong-joon and former two-term lawmaker Lee Hye-hoon.

Chung and Kim are the frontrunners to challenge incumbent Park Won-soon, who is running for re-election for the Democratic Party.

Chung, a son of Hyundai Group founder Chung Ju-yung and the richest lawmaker in the National Assembly by far with more than 1.9 trillion won ($1.7 billion) in assets, declared his candidacy on March 2.

Though the former chairman of shipbuilder Hyundai Heavy Industries said in his declaration speech that he intends to complete his four-year mayoral term if he wins the race, it is widely speculated that the veteran lawmaker would actually use the mayoralty as a springboard to running in the 2017 presidential race.

The ruling Saenuri Party hopes that Kim’s entering the primary race will reinvigorate the party and raise the prospect of taking back the Seoul mayoral post, which has been occupied by Park since he won a 2011 mayoral by-election.

In and out of the ruling party, Kim is considered a candidate with special strengths should he win the primary and become the candidate.

Among his political strength is his birthplace, Jangseong County in South Jeolla, a stronghold of the opposition.

The ruling party hopes that Kim will be able to attract Seoul voters with origins in the Jeolla region, pulling support away from Park. Other strengths are his long years in public service and highly recognized administrative skills.

Kim served as a judge for over 30 years after he passed the bar exam in 1972.

After working as chairman of the Board of Audit and Inspection from 2008 to 2010, he was appointed by former president Lee Myung-bak as prime minister in October 2010 and served in the post until the end of the Lee administration in Feb. 2012.

The fact that Kim is the longest-serving prime minister since the introduction of direct presidential election in 1987 is attributed to his administrative professionalism.

In a joint survey by the JoongAng Ilbo and Gallup Korea of 800 Seoul residents Saturday, incumbent Park and Chung are in a statistical dead heat race with Park slightly leading Chung 42.5 percent to 42.1 percent, which is within the margin of error of plus or minus 3.5 percentage points. In a hypothetical race pitting Kim against Park, Kim trails Park 34.3 percent to 47 percent.