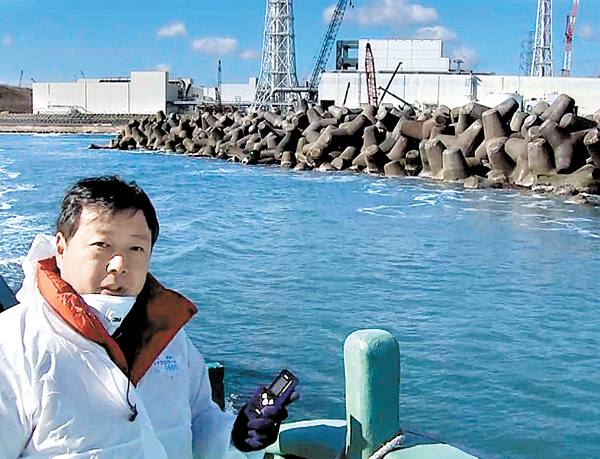 Kim Hyun-ki, a Tokyo correspondent for the JoongAng Ilbo, takes off his mask and poses for a photo on Feb. 23 after approaching the Fukushima Daiichi nuclear power plant via boat. When reporters approached the tetrapods of the levee near the port, a Geiger counter indicated that radiation levels were 110 times more than permissible standards. The plant’s No. 3 reactor, which suffered a hydrogen explosion three years ago, is seen behind. By Seo Seung-wook

FUKUSHIMA, Japan - Three years have passed since a 9.0-magnitude earthquake and tsunami struck the eastern coast of Japan on March 11, 2011, devastating the island nation and triggering the meltdowns of three reactors at the Fukushima Daiichi nuclear power plant.

The accident was a worst-case scenario come to life, one that stunned the international community and shed light on the vulnerabilities of the nuclear industry. The events that followed the disaster had significant ripple effects for Japan and its neighbors, leading to concerns that remain even today about radiation levels, food safety and whether the Tokyo Electric Power Company (Tepco) is capable of dealing with the aftermath of the crisis.

When a team of JoongAng Ilbo and JTBC reporters visited the Fukushima site last month to witness for themselves the state of the plant 36 months later, their boat came just within 100 meters (328 feet) of its port before a deep sense of dread set in.

The reporters believed they would be safer from radiation exposure in the open sea, but contaminated water spilling out of the port and a levee that had transformed into a nuclear hot spot - where radiation levels are abnormally high compared to surrounding areas - were enough to make even the bravest of its members anxious.

A lot has changed in Japan in just three years, but here in Fukushima, the effects of the disaster have lingered, and authorities believe it could take decades to contain and repair all the damage.

The earthquake and tsunami not only destroyed the three reactors but also crippled the plant’s cooling system, and instances in which the storage tanks on site leak radioactive waste have persisted. It is estimated that hundreds of tons of contaminated groundwater spill into the ocean each day.

Japan has actively worked toward replacing nuclear energy with fossil fuels since then and vowed to phase out nuclear power completely by 2030. However, last month, in a shift away from the pledges of the previous government, the Shinzo Abe administration announced a draft plan that left open the possibility that Japan may restart some of its nuclear reactors, once again moving toward nuclear power as an energy source. Yet Japan remains skeptical, especially as Fukushima Daiichi sits idle, a tangible reminder of the past and a cautionary tale.

It took two months for the media team to persuade the local fishermen’s cooperative association and the Japanese Coast Guard to let them journey out to the site. But the group was eventually granted permission, and on Feb. 23 they boarded a 4.9-ton trawler - a small boat that can only carry 13 people - and set out from the Hisanohama Port in Iwaki, Fukushima, about 30 kilometers south of the site.

“It may look small,” said Yoshio Yoshida, the boat’s 61-year-old captain, “but it can speed up to 57 kilometers per hour.”

Just like he warned, the team members could barely stand straight once the boat got up to speed.

About 10 minutes after departing, the Hirono power station appeared on the left, with white smoke billowing from its chimney. And after another 20 minutes, the Fukushima Daini nuclear power station came into view.

Daini managed to escape an accident like the one at Daiichi, thanks in part to its emergency power sources. When reporters checked radiation levels near the plant, the Geiger counter indicated 0.09 microsieverts, much lower than the permissible exposure limit of 0.19 microsieverts.

The Daiichi nuclear plant emerged on the horizon next, about an hour after the team left the port. The tension was palpable, and the group members immediately put on their anti-radiation suits and masks.

Employees at the plant were busy working to remove 1,553 fuel rods out of the fourth reactor. The third reactor, which was damaged by a hydrogen explosion three years ago, stands just next to it. The upper part of the outer wall that covers the reactor was crumbling here and there, still bearing the scars of the blast, which occurred just three days after the earthquake and tsunami. 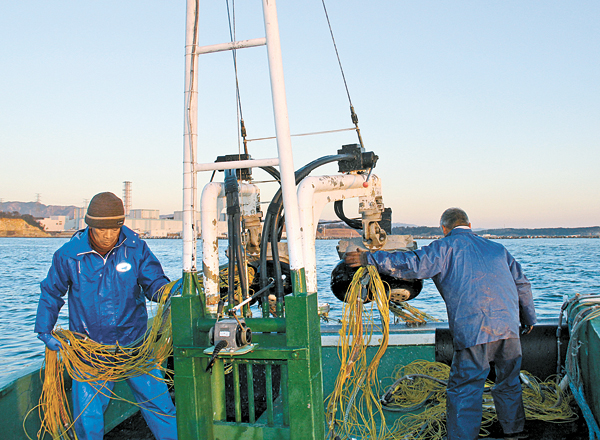 The crew of a whitebait fishing boat withdraws a net on Feb. 24 from the waters near the Hirono power station, seen in the background.

On the other side of the fourth reactor were contaminated storage tanks, the “trouble makers” as they’re called, which continue to leak radioactive water into the Pacific. Groundwater from the hills behind Fukushima makes its way into the reactor basements daily, and more than 1,000 water tanks contain about 300,000 tons of polluted water, close enough to fill up about 150 Olympic-size swimming pools.

Prime Minister Abe affirmed at a summit in September that the radius of the contaminated water was completely restricted to 0.3 square kilometers (74 acres) within the port. But when the team finally worked up enough courage to come closer to the port, the Geiger counter began to beep, recording about 2 microsieverts, more than 10 times the normal standard.

The interval of the beeps rapidly increased when the boat passed alongside one of the levees, signaling danger.

“Stop, don’t go any closer!” one of those on board shouted.

The detector sounded relentlessly, indicating a radiation level of 21 microsieverts, about 110 times the permissible level of exposure. Levels in the open water weren’t particularly high, but the tetrapods on the levee, which had consistently accumulated radiation over the past three years, had transformed into a nuclear hot spot. The Geiger counter dropped again as the boat made its way away from the dike.

However, as the team moved another 200 meters east, they could see that the port was not fully closed off, and a 50-meter-wide opening let water freely escape.

Even though contaminated material is diluted with 300 tons of groundwater every day, the structure of the port is such that it is unable to completely prevent it from flowing into the sea.

A series of leaks from unstable storage tanks have aggravated cleanup efforts in recent months. About 100 tons of highly radioactive water spilled from one of the tanks into the sea on Feb. 20, Tepco confirmed, in what was likely the worst spill reported at Fukushima Daiichi in half a year.

As the reporting team moved along, they noticed that they were being trailed by another ship, which Yoshida acknowledged was a patrol boat from the Japanese Coast Guard.

“They were following us all the way here, and [the patrol boat] stopped there when we stopped near the Daiichi nuclear power plant,” Captain Yoshida explained. 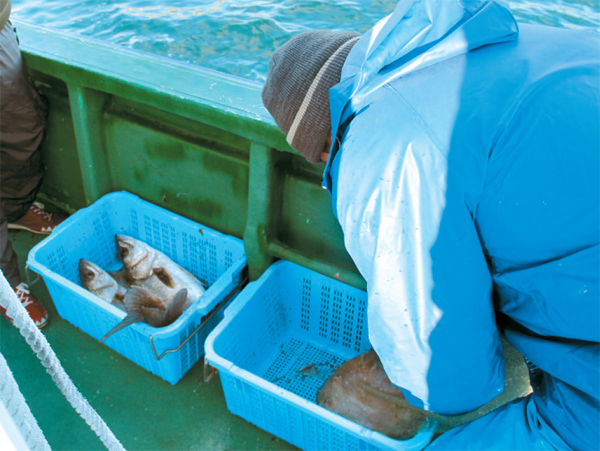 Sea bass that were caught in a net cast 20 kilometers (12 miles) south of the Fukushima Daiichi nuclear power plant are seen Feb. 24 in a basket. Sea bass caught in Fukushima Prefecture are banned from shipment. By Kim Hyung-ki

“The ocean in front of the Daiichi power plant was once one of the richest fisheries in Fukushima Prefecture,” he added, “but we can’t do anything about it because the spillover of groundwater [mixed with the contaminated water] isn’t going to end in a year or two - it may last until the end of the Earth.”

Meanwhile, local authorities have been struggling to normalize the fishing industry in the region. The Fukushima Prefectural Fisheries Experiment Station is in charge of checking radioactivity levels of the fish caught in the nearby sea, and the boats that gather samples from the assigned areas send them there.

When the reporters boarded Yoshida’s boat the following day, they watched as he caught Shirauo, or whitebait, and collected samples from the waters in front of the Daini nuclear power station and the Hirono power station.

On arriving back at the port, Yoshida and the other fishermen took their samples to the experiment station, where researchers sort, weigh and clean the fish.

When the reporters revisited the center on March 3, an official confirmed that the whitebait had not been contaminated by radiation and added that they were likely born after the accident at Fukushima Daiichi.

In addition, no radiation was detected in the crab samples, though the bass samples showed 200 becquerels per kilogram of cesium, which is double the permissible level allowed for shipment.

Overall, the results seemed hopeful, though no one in the local fish markets was seen selling fish caught from the Fukushima seas.

“We don’t have any fish from Fukushima,” said a vendor at a fish market near Onahama Port in Fukushima. “I don’t even know when we would sell them again.”