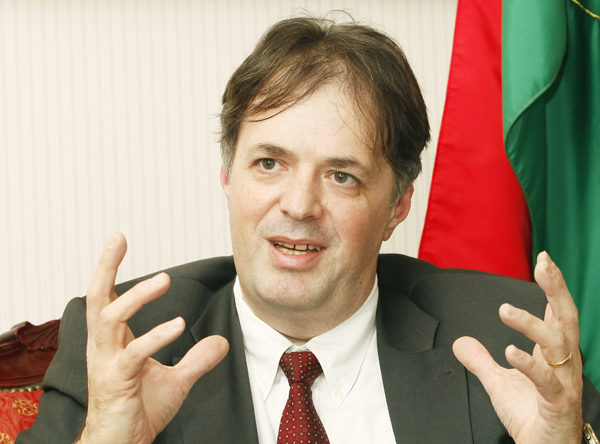 When Hungary and Korea established full diplomatic ties in 1989, it was a symbolic milestone, marking the first Eastern bloc nation to form diplomatic relations with Korea. But the government’s courtship of the former Socialist allies of rival North Korea prompted the Communist state to respond with anger, threatening that it would downgrade ties with Budapest to protest the evolution of South Korean-Hungarian relations.

Since then, Korea and Hungary have kept up cooperation in different fields, building the foundation for an amicable relationship.

Q. What are some major goals or objectives you have when it comes to the bilateral relationship between Korea and Hungary?

A. I believe that Hungary and Korea have been very successful in forging trust-based relations over the past 25 years. The basis of our relationship is solid, but I believe the time has come for us to strengthen that foundation. And I think that foundation can become more solid when people from both countries know more about the other. To this end, I’d like to work on helping Koreans become more familiar with Hungary.

Hungarian composers, for example, have been at the forefront in music history, and their music continues to resonate today. Among them are Franz Liszt, Bela Bartok and Zoltan Kodaly. In addition to music, I want to promote the idea that Hungary is a land of innovation. A number of everyday equipment and products - from ballpoint pens, soft contact lenses and matches to Rubik’s cubes and noiseless refrigerators - were invented by Hungarians.

The year 2014 marks the 25th anniversary of diplomatic relations between Hungary and Korea. Is there any specific sector in which you want to build up more cooperation with Korea this year?

Hungary was the first country among the so-called Socialist camp in Central and Eastern Europe to establish full diplomatic ties with Korea. This is an important milestone that we want to use to highlight both the value and the great potential of the relationship.

The Embassy of Hungary is seeking ways to cooperate with Korea in different sectors. In order to find a potential field of mutual interest and build further cooperation, we have had four ministerial-level visits from Hungary - the foreign and the economic ministers, and the first ever visit to Korea by a Hungarian defense minister. For the remainder of the year, we want to exchange high-level visits.

As Hungary’s ambassador to Korea, I also hope that the two countries continue to have dialogue on global and regional issues. Hungary consistently supports Seoul’s policy to maintain peace on the Korean Peninsula and bring to a peaceful end the division of the two Koreas.

Facilitating business and commerce activities remains a top priority. I believe that Hungary offers excellent opportunities to foreign companies at a time when Europe shows signs of recovering from the economic downturn over the past five to six years. Situated at the heart of Europe, the country can offer connections to both Eastern and Western Europe. This geographical advantage, along with Hungary’s status as [a European Union] member, has been attracting some 50 Korean companies to operate their business there.

Despite increased business cooperation, it is still crucial to increase the overall volume of trade and investment between Hungary and Korea. It’s clearly my ambition to spread the news about the advantages of the Hungarian economy to Korea’s business community, encouraging them to join other Korean companies in Hungary. The successful performance of major companies like Hankook Tire and Samsung sets a good example.

We’d like to have conferences or seminars to present their successful operation and offer information about Hungary’s business environment. There, I’d like to stress that there are a lot that companies can take advantage of in Hungary. Many foreign companies in Hungary have discovered that the work force is highly skilled but relatively affordable. They also said that infrastructure is well established.

For these reasons, many Korean companies in Hungary are expanding their businesses, and [the Korea Development Bank] has designated its Budapest office as the headquarters of its operation. Those Korean companies have invested a total of $2 billion in Hungary.

Other than business, what are the other fields in which you want to expand ties?

I am currently trying to make contacts with major Korean universities to draw their attention to the potential partnership with top Hungarian universities. The major focus will be in the field of engineering and medicine. There are already some 200 Korean students studying in Hungary and we hope the two nations will exchange more students.

I also want to present Hungarian culture to Koreans this year. The embassy is planning on holding several concerts this year, including a visit by the Hungarian National Philharmonic Orchestra. The Hungarian exhibition at the National Palace Museum, which displayed artifacts from the 17th to19th centuries, was well received. Although the Seoul exhibition ended on March 9, it will move to Daegu and open on April 1. We will also look at other areas, including higher education and research and development. Much like Korea, Hungary puts a high value on education. So, I believe there are promising aspects in terms of cooperation in the education field. I’d like to point out that Hungary has the most Nobel-prize laureates per capita, which indicates the strength of our education system.

People often say that Koreans and Hungarians have a lot in common. What do you make of this idea?

Many Hungarians tell me how quickly they feel like home in Korea and vice versa. Both Hungarians and Koreans have experienced turbulent history and adversity. Closely located to other great powers, Hungary struggled for centuries and was often at war with its neighbors. The manner in which we use our names is the same as in Korea. The two countries also have similar sentence structures, and we both love spicy food. And family has a central role in both societies; we also have a tradition that holds great respect for the elderly.