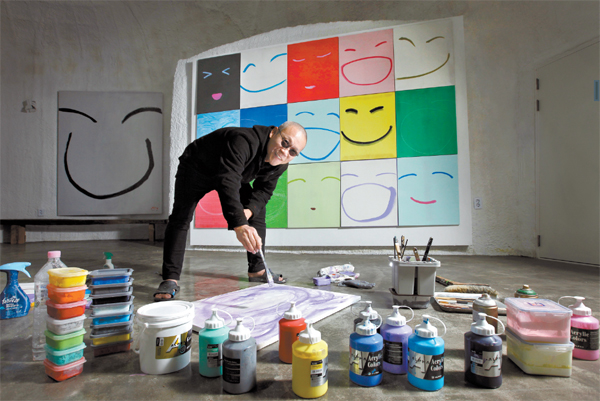 Artist Lee Mok-ul works in his atelier in the serene countryside of Yangpyeong, Gyeonggi. The 53-year-old artist has gained fame for his hyperrealistic paintings, particular of daechu (Korean dates). But these days, as his eyesight is deteriorating, he is focusing on a cheerful new series called “Smile.”

Artist Lee Mok-ul’s atelier is located in the serene countryside of Yangpyeong, Gyeonggi, facing the natural splendor of the Namhan River. At the threshold of the house, there’s a sign that reads “Anyone can come, this is where we can enjoy painting with a cup of tea.”

Lee is known for his hyperrealist paintings, which have been acclaimed as “more real than real” by many art critics. Recently, some of his oil paintings were even included in middle school textbooks.

“I had to make a living by working part time on all kinds of things,” he said, sitting in his countryside studio. “And by the age of 10, I was losing vision in one eye.”

Despite those circumstances, Lee says that all he could think about was art. “At the time, a lot of boys had the ambition to become the next president of Korea. Some kids also dreamed of becoming a high-ranking military officer,” said Lee.

“But my dream was always the same: becoming an artist. Although I never received any kind of art education, I just couldn’t stop drawing and painting.”

Above: One of Lee Mok-ul’s hyperrealistic paintings, this one depicting daechu, or Korean dates. Below: A painting of old rubber shoes.

Lee said he was able to get a secondary school diploma by attending night classes while working as an errand boy during the day.

He then reminisced about the moment that helped shape his life path: “Working and studying at the same time wasn’t easy, and one day, my art teacher in school approached me and said, ‘You shall paint.’ Though simple and curt, his words struck me at that time.”

After getting advice from his art teacher, the fledgling artist devoted himself to painting, and finally was admitted to the College of Art and Design in Yeungnam University, one of the most exclusive schools in the province.

But college brought a whole new set of hardships for Lee, many of them financial.

“Those years were a series of frustrations. My works from college mostly depict the agony of life,” said Lee.

“Then I started to question my own existence as a human being. ‘What is art?’ and ‘Why should I draw and live like this?’ It was like falling down to a never-ending abyss.”

In order to seek an answer for his questions, Lee isolated himself from the outside world for more than 10 years.

Destroyed and dejected, the artist could not hold his brush for years. Then, one day, Lee saw a bird flying through the persimmon tree in his house.

“Seeing that scene was an epiphany that changed my whole view of life. The bird in the tree seemed to symbolize the relationship of being, as well as the harmony of yin and yang,” he said.

The incident was so meaningful that the artist changed his official name to “Mok-ul,” which means tree (mok) and bird (ul).

He then continued to draw the things around him on the canvas, like apples, Korean dates, pumpkins and mackerels. People started to call his works “hyperrealist.”

When he made a debut in the international art scene in 1998, art critics from around the world showed great attention to his work. Lee looked like he had found his breakthrough.

Nonetheless, he could not entirely enjoy the fruits of his efforts, as his vision was continuing to deteriorate.

“For an artist, losing his vision is the most critical thing that can ever happen,” Lee remarked. “I started to pray to whomever to give me one last chance to draw. And I promised that if I won such an opportunity, I would draw happy and optimistic images.” 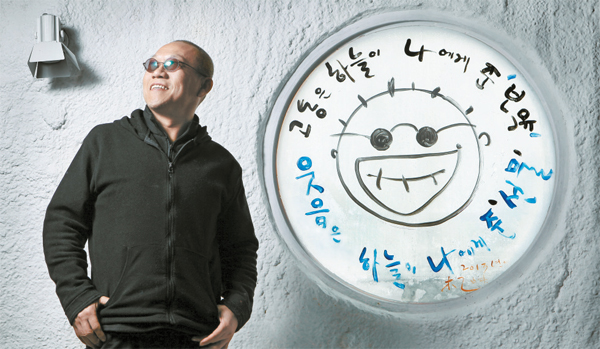 Lee smiles beside one of his “Smile” series, which he now focuses on.

“‘Smile’ was a gift from heaven that helped me to communicate and interact with the rest of the world,” Lee said.

Indeed, behind Lee, on one of his paintings he wrote, “Pain is free medicine, while smiles are a gift from heaven.”

This year, Lee is planning a new project.

“As my vision has deteriorated, I can barely see the light in front of me. Actually, what I see is a series of monotonous color, without any concrete forms. It’s like standing in a blanket of fog.”

“Just like keeping a journal, I will keep drawing what I can see,” he said.

The artist concluded that his life itself resembles the fog - meaning that he was never able to discern the meaning of life clearly.

“I have a conviction that if I could penetrate the fog, I would somehow be able to see a whole new truth,” he said.