Left: A golden horse painting on a gilt bronze bamboo plank has been restored for the special exhibition “Cheonmachong, the Royal Tomb of Silla.” Right: The “Cheonmado,” a painting of a white horse, was discovered in the royal tomb in 1973, and has been designated as National Treasure No. 207. Provided by Gyeongju National Museum

It may be hard for us to know everything that was put into the royal tombs during the Silla Dynasty (57 BC-AD 935), but tourists to the historical city of Gyeongju, North Gyeongsang, now have a better chance to learn about that ancient burial culture than ever before.

The Gyeongju National Museum today is opening the largest exhibition ever of artifacts found in Cheonmachong, the Silla tomb that was excavated 41 years ago and revealed more than 10,000 items.

The exhibition “Cheonmachong, the Royal Tomb of Silla” features 11 national treasures and 1,600 artifacts, many of which have never been publicly displayed before. Using advanced technology that was not available four decades ago, the museum has restored many of those artifacts, estimated to date back to the fifth or early sixth century.

Among the items on display is a gilt bronze maldarae, a plank that hangs under a saddle so that riders do not get their legs dirty. The restoration has revealed a painting on the maldarae of a cheonma, or a mythical flying horse, after which the tomb was named.

“It is meaningful that many of the gilt bronze artifacts that experts could not see well at the time of excavation because they were heavily rusted have been found to have paintings on them of cheonma,” said Choi Byung-hyun, professor emeritus at Soongsil University, who participated in the 1973 excavation.

A gikkoji, a pin that holds a flag in place.

A painting of a golden horse on gilt bronze is affixed to a plank made of small pieces of bamboo that were covered with fabric. Yi Young-hoon, director of the Gyeongju National Museum, said that he will push for that artifact to be designated as a national cultural heritage item.

“It is the first time for Korea to find a gilt bronze maldarae, and because the painting of a horse has remained so vivid, it will help open another chapter on the arts of Silla,” he said.

“Based on its rarity and artistic quality, there is no reason to stop such artifacts from being designated as national heritage items.”

That particular artifact had been kept in a storage room at the National Museum of Korea until recently to keep it at the proper temperature and humidity. It had been left covered in dirt just like when it was found to prevent it from rusting further.

But now, thanks to better restoration technology, including infrared scans, the painting can be presented to the public in its genuine condition for the first time.

Another maldarae painting was also discovered. The birch maldarae is a set with the already recovered “Cheonmado,” National Treasure No. 207, which features a white horse. The excavation records indicate that there should be one more lacquer maldarae, but only a very small part of it is known to still exist. 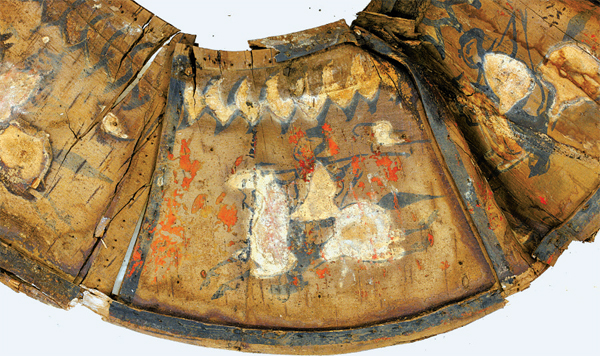 “Gima Inmulmun Chaehwapan,” a painting of a horse and rider on a plank made of birch bark, is being displayed to the public for the first time.

Additional paintings have also been discovered on other planks, giving researchers better insight into the art of the Silla era. One on display at the exhibition for the first time is the “Gima Inmulmun Chaehwapan,” a painting of a rider on a horse.

However, these paintings will only be available partially during the exhibition because the museum is being careful to ensure their preservation. They will be part of the exhibition until April 6, and then they will be available from April 29 through May 18. The last chance to see them will be from June 3 through June 22.

Some other artifacts that excavation experts were unable to identify before are also on display. There is a pin that is now known to have been used to fix a flag in place, known as a gikkoji.

If Gyeongju is too far to visit, you can wait until the exhibition moves to the Cheongju National Museum on July 24 in Cheongju, North Chungcheong, where it will last until Oct. 5.

*The exhibition “Cheongmachong, the Royal Tombs of Silla” opens today and lasts until June 22 at the Gyeongju National Museum in Gyeongju, North Gyeongsang. The museum is open 9 a.m. to 6 p.m. on weekdays, but is open until 9 p.m. on Saturdays and until 7 p.m. on Sundays and national holidays.