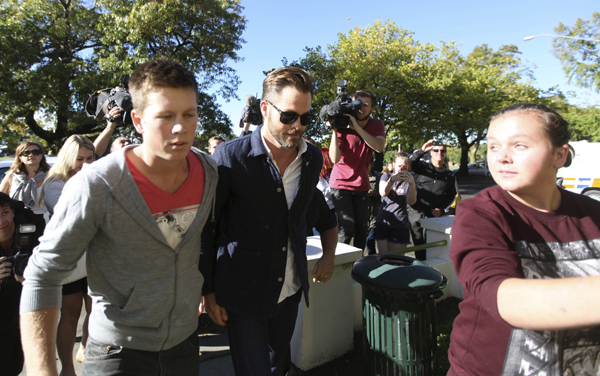 The 33-year-old American was fined $93 New Zealand dollars ($79) and had his New Zealand driver’s license suspended for six months during a hearing at the Ashburton District Court.

Police pulled over Pine early on March 1 after he’d attended a party to mark the end of filming on the movie “Z for Zachariah,” which is due for release next year. Fairfax Media reported that Pine told police he’d consumed four vodka drinks.

Police told the court that a blood test found Pine’s blood-alcohol level was 0.11 percent, which is over New Zealand’s legal limit of 0.08 percent.

Pine stood silently during the hearing, allowing his lawyer, Marilyn Gilchrist to enter the plea.

According to Fairfax, Gilchrist told the judge that Pine acknowledged he’d made the wrong decision to drive that night. Gilchrist said her client had suffered emotionally and professionally and that the negative publicity had put his acting contracts in jeopardy.

Pine appeared relaxed as he left the courtroom, stopping to sign a couple of autographs for fans who had gathered outside before being driven away.

Much of the filming of “Z for Zachariah” took place on the South Island’s picturesque Banks Peninsula.

Before being pulled over by police, Pine had been at the Blue Pub in Methven with his Icelandic girlfriend, Iris Bjork Johannesdottir.

“The pub was closed to the public later in the evening and approximately 80 actors and crew attended the party, which finished at 3 a.m. on March 1,” the bar said in a statement. “This was a well-controlled party, the cast and crew were friendly and it was a great night, not a wild party.”

The statement said that “Chris Pine did not appear to staff to be intoxicated to a level where intervention might have been warranted.”