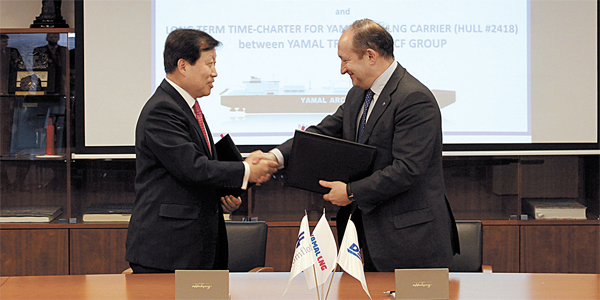 It will be manufactured at Okpo Shipyard in Geoje, South Gyeongsang.

The company said the vessel will be used in the Yamal project under which Russia’s Novatek, France’s Total and China’s National Petroleum Corporation are developing the Yamal Peninsula in Western Siberia for natural gas.

These companies plan to produce 16.5 million tons of LNG a year.

DSME has had a close relationship with Sovcomflot, which manages LNG carriers for the Yamal project, after receiving orders for 15 oil or LNG carriers since 2004.

The Korean shipbuilder recently established a branch in Moscow.

“By winning the world’s first order for an ARC-7 icebreaking LNG carrier, DSME again proved its superb technology,” said DSME President and CEO Ko Jae-ho. “We have now successfully entered the Arctic Ocean market with this contract and can build a new relationship with other energy companies like Novatek and Total.”

With the latest order, DSME has so far secured orders for 15 vessels worth $1.74 billion this year