Google may end up in ‘Patent War II’

Google may end up in ‘Patent War II’ 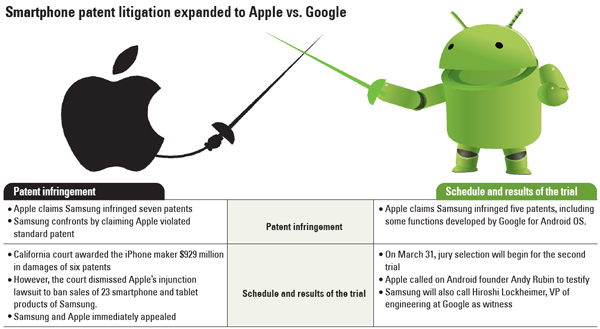 The Apple vs. Samsung smartphone patent litigation is expected to expand a battle between Apple and Google.

According to the IT industry on Sunday, Apple decided to call Andy Rubin, vice president of Google, to testify in the second patent suit starting March 31 in San Jose District Court in California.

Rubin is the founder of Android, which designed and manufactured the mobile operating system (OS). He is also known to have worked at Apple for two years, at Microsoft for two years and at Google for eight years.

Apple is calling on Rubin as a witness to determine the similarities between Google’s Android OS installed in Samsung smartphones and Apple’s iOS.

“Apple’s attorney will investigate whether Rubin has used Apple’s iOS as a reference or guide and eventually claim that Samsung’s Galaxy copied Apple’s iPhone,” said an IT industry source.

The trial of the first case, which Apple filed in April 2011, ended on March 6 as the court awarded the iPhone maker $929 million in damages relating to six patents. The court decided that Samsung had violated Apple’s user interface.

However, Samsung’s infringement was not recognized anywhere else in the world.

However, these functions were not developed by Samsung but are included in Google’s Android OS. Furthermore, Samsung and Google signed a cross-licensing agreement in January.

It will be nearly impossible for Google not to get involved in Apple’s attack on Android. Google’s Vice President of Engineering Hiroshi Lockheimer and Google’s software engineer will be called to testify for Samsung.

After all, Apple began the second patent litigation with the purpose of attacking the whole Android camp.

In his biography released in 2011, Jobs even said he would engage in thermonuclear war if it was to destroy Android.

Apple is requesting $40 in royalties for each Samsung smartphone. In the first patent litigation trial, the award was set at $7.14 in royalties per device.

The patent litigations ahead will likely be a repeat of the tedious process seen in the previous litigations.

Although the verdict of the first litigation came in three years, Samsung and Apple both challenged the ruling in U.S. appeals court on the same day. In addition, they expanded the litigation to the second round.

It means that it might take a few more years to see the final conclusion. However, there is a possibility both sides could make agreements during the patent war.

“Apple and Samsung could cease litigation at any time when they both decide there is no more benefit from the lawsuit, as the flagship products of the market are moving from smartphones to cars and health care products,” said a source at a mobile communications company.