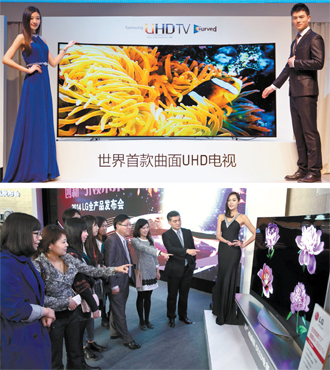 Samsung Electronics and LG Electronics are gearing up efforts to bolster their presence in the Chinese ultra-high definition (UHD) TV market, where they lag far behind local companies armed with price competitiveness.

Samsung Electronics yesterday introduced its latest UHD TV products at a media event in Shanghai, including a 105-inch curved UHD TV, the first and largest curved TV in the world. A total of 36 UHD products from Samsung were displayed at the event, including 78-inch, 65-inch and 55-inch curved TVs, and110-inch, 85-inch, 65-inch, 55-inch, 50-inch, 48-inch and 40-inch flat TVs.

“We aim to lead the Chinese market by introducing a wide array of curved UHD TVs and a variety of flat UHD TVs,” said Park Jae-soon, vice executive president of Samsung Electronics’ headquarters in China.

“The Chinese market is growing quickly and our curved UHD TV, which provides overwhelming immersion experiences, will create a new demand for picture quality TV in the Chinese market,” Park said.

Samsung, the world’s largest seller of TVs, is the second-biggest player in the global UHD TV market, the technological forefront in the TV industry initiated by Sony in 2012. But it faces an uphill battle in the world’s most populous country.

According to DisplaySearch, Samsung’s global market share in the UHD TV market was 14.9 percent as of the fourth quarter last year, second to Sony’s 18.2 percent. In China, it was only the fifth player, with a meager 3.2 percent share, the research agency said. Chinese companies dominate the top five positions, all with double-digit shares, led by Skyworth at 23.3 percent. Skyworth was No. 3 in the global market, trailing Samsung by only 1 percentage point.

Yesterday, LG held a similar media event in Shanghai, where it displayed a 77-inch Ultra HD curved OLED TV and other UHD products. The 77-inch UHD curved OLED TV is the world’s biggest curved UHD OLED TV and earned the Best of Innovations award in January from the International Consumer Electronics Show in Las Vegas.

“We will strengthen marketing tailored to China with the best-quality products,” said Shin Mun-beom, head of LG Electronics’ China unit.

Both Samsung and LG will also showcase their latest UHD TV products during the Appliance World Expo 2014, the companies said. The fair, which attracts 65,000 visitors annually, will open its four-day schedule in Shanghai today.