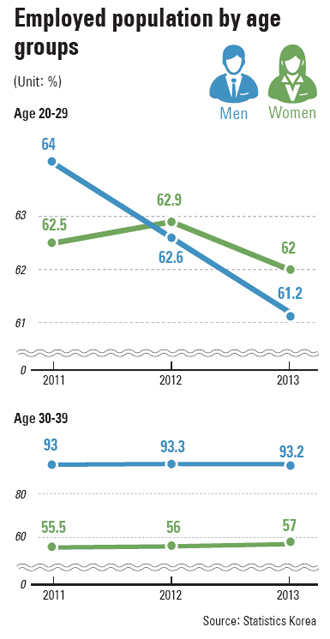 More Korean women in their 20s were eager to get a job than men in the same age group in 2013, for the second straight year.

Among 30-somethings, however, only 57 percent of women were employed, compared to 93.2 percent of men.

According to a survey by the online job portal Saramin, released yesterday, the labor force participation rate for Korean women in their 20s was 62 percent, 0.8 percentage point higher than men in their 20s.

The study was based on a Statistics Korea’s poll of the economically active population, age 15 to 64. Unlike the employment rate, the labor force participation rate includes the unemployed who are on a job hunt.

The labor force participation rate for women in their 20s surpassed that of men of the same age bracket in 2012 with 62.9 percent, compared to 62.6 percent for men, which was the lowest figure for men in their 20s since 1999 when data started being collected.

Men in their 30s were about 1.5 times more likely than comparably aged women to be working or looking for work.

Even with efforts by President Park Geun-hye to get women with children back into the work force by pushing conglomerates and government agencies to generate high-quality part-time jobs, 2.2 million women in their 30s last year said they were ready to work, only a 1 percent increase compared to the previous year.

“Women show reduced intention to work after turning 30 due to the difficulty of juggling work and family life, which make them quit work,” said Im Min-uk, a public relations manager from Saramin. “An effective use of the female work force will make conglomerates more competitive and eventually offer a positive impact to the national economic growth.

“There should be policy support that eventually enables women to continue working without feeling pressured about keeping employment status while giving birth to a child and taking care of them.”

Labor market experts point out the need to regard the numbers carefully while focusing more on job quality, which may be a reason why women in their 30s are hesitant to rejoin the labor force.

“There was a positive change quantity-wise in female re-employment, also a plus sign to the employment rate,” said Go Seung-yeon, a research fellow at Hyundai Research Institute. “What’s more significant is sustaining the change and providing more high-skilled job positions for various employment formats like part-time. “Not just assuring women they can put food on their tables, it is important to serve them with more quality opportunities to pursue their roles and values as a member of the society.”