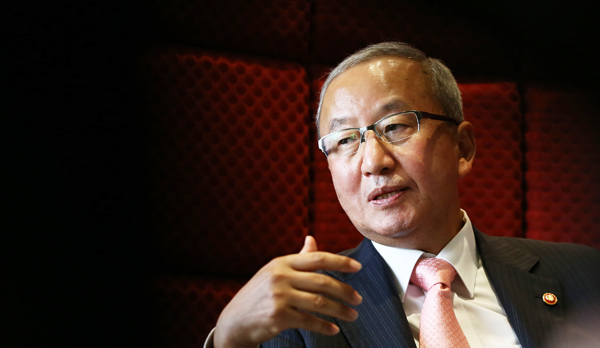 “As proven in the president’s recent remarks, the government is strongly determined to improve regulations,” Hyun said. “Along with the public sector reform plan, regulation reform will be a flagship agenda.”

In recent months, Park has been championing a drive to do away with red tape. During a meeting with chief Blue House secretaries early this month, Park likened excessive regulation to a “cancer that needs to be removed.” Last Wednesday, she said the government’s fight against regulation is a “live or die” situation.

Since Park’s inauguration, the Ministry of Strategy and Finance and economy-related ministries have shown some confusion, unable to announce any clear agendas under the creative economy initiative.

“Regulation reform is an issue not only in Korea, but also in countries like Britain and Japan, being a core means to boost economies,” Hyun said. “It is the strongest economic policy the government can take, and in a timely manner. This is the right time to make hard efforts at all government levels.”

The Korean Federation of Industries (KFI) and Korea Economic Research Institute (KERI) yesterday said that the government should root out three types of regulations: the “Galapagos regulations,” the “Hong Gil-dong regulations” and “emotional regulations.”

The business community cited Galapagos regulations as the biggest hindrance to growth in the local market. Those regulations refer to rules that exist only in Korea.

One of them is a strict regulation on the development of tourism sites. To develop a tourism complex, a company should submit a full-scale plan, including details of land use. Businesses have complained that the rule can’t work, as most huge construction plans can’t be devised at one time and can’t avoid corrections in the course of that time.

Danish Lego Group had planned to build a Lego theme park in Icheon, Gyeonggi, by investing $200 million in 1996, but it gave up the project due to numerous regulations that hinder developments in Seoul metropolitan areas on the pretext of provincial equality. The company ditched Korea and chose Germany in 2002.

A KERI researcher said Korea has too many regulations that were made after big incidents, or accidents that appeal to public emotions, like environmental regulations. Designation of exclusive businesses for small companies is one example.

The KFI mentioned Hong Gil-dong regulations, too. They refer to executive orders, verbal guidelines and recommendations that are more powerful than law, even though they are called regulations.

Hong Gil-dong is a character in a novel written in the Joseon Dynasty who wasn’t allowed to call his father “father” because he was the son of a concubine.