A final performance for our queen

A final performance for our queen 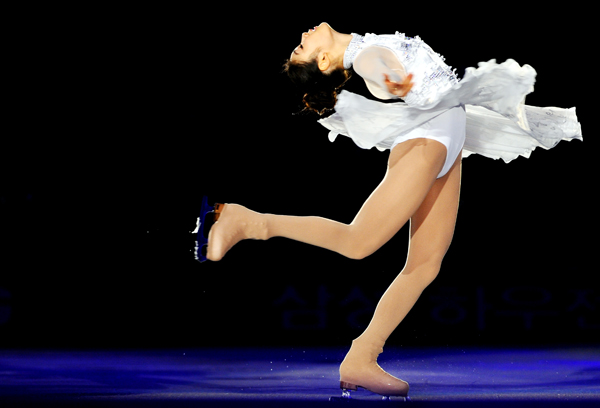 There will be one last chance to see figure skating star Kim Yu-na, who retired from competition after the 2014 Sochi Winter Olympics.

All That Sports, Kim’s agency, said yesterday that she will stage an ice show with other world-class skaters May 4 to 6 at Seoul Olympic Park in Songpa District, southern Seoul.

The agency yesterday announced the lineup for the Samsung Galaxy Smart Air Conditioner All That Skate 2014.

The show will include Denis Ten of Kazakhstan, who won the men’s bronze in Sochi. Ten also paired up with Kim in the gala finale at the Sochi Games. His breakthrough came when he won a silver medal in the International Skating Union Championship in 2012.

Other skaters on the program will be pairs gold medalists Maxim Trankov and Tatiana Volosozhar of Russia, and bronze medalists Aliona Savchenko and Robin Szolkowy of Germany.

Alexei Yagudin, who won gold in the 2002 Salt Lake City Winter Olympics, and Switzerland’s Stephane Lambiel, who has made nine consecutive appearances in the show, will also skate.

“Yu-na was a little girl when I first saw her in 2006, and now she is one of the world’s greatest figure skating legends,” said Yagudin. “It is my honor to perform with her in the same show.”

The agency said Kim will unveil a new gala show program to express her gratitude for the constant support from her fans.

Details of the programs and ticket prices will be announced later, the agency said.

Russia’s Adelina Sotnikova won gold with 224.59 points, by far her best score ever, and Carolina Kostner of Italy took bronze with 216.73 points.

Other Korean figure skaters expected to compete in the 2018 Pyeongchang Winter Olympics, including Kim Hae-jin and Park So-youn, both 17, and Kim Jin-seo, 18, will appear on the ice to perform with Yu-na.