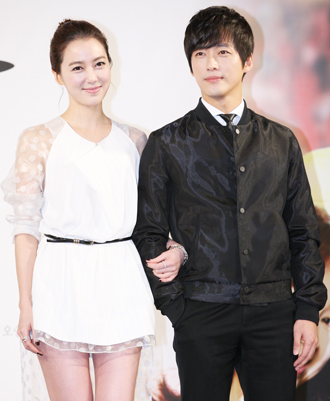 Actor Namgung Min, 36, said he is happy to be taking part in the coming JTBC drama, “Jang-guk, Who Became Dal-lae: Reunion in 12 Years,” yesterday at a press conference in Yeouido, western Seoul.

“It feels like I am attached to actresses who bear the name of ‘So-yeon,’” beamed the actor.

The new drama is reported to unfold the hilarious episodes of two families, who became entangled in 2002 after young Jang-guk (Lee) becomes impregnated by Jun-su, played by Namgung. To move on from such an “accident,” Jang-guk decides to change her name to Dal-lae.

After 12 years, the two families encounter each other in a random place, and new conflicts emerge between them.
“I feel the good vibes in our team because I’ve discovered some coincidences happening between Min and me,” said the actress. “As I left the MBC entertainment show ‘We Got Married,’ I heard that the new couple to fill in the spot would be Namgung Min and trot singer Hong Jin-young. I hope the two could make wonderful memories in the program.”