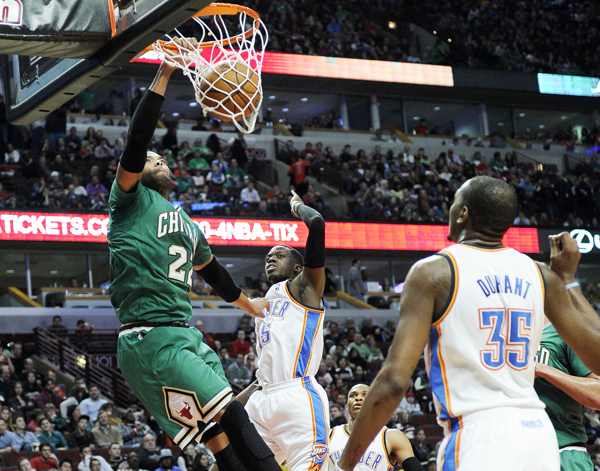 Bulls forward Taj Gibson dunks against the Thunder during the second half at the United Center on Monday in Chicago.[USA TODAY/NEWS1]

Individual accomplishments are all well and good to Kevin Durant. What means more is that the Thunder shook off their worst loss, then stood their ground when the Bulls came charging at them.

Russell Westbrook added 17 points after sitting out the previous day to rest his surgically repaired knee, and the Thunder rebounded from their most lopsided loss of the season.

They went on a 13-point run after the Bulls scored eight straight early in the fourth to cut the lead to one and pulled this one out after falling by 23 at home to Dallas on Sunday.

Durant ran his streak of games with 25 or more points to 32, the longest in the NBA since Michael Jordan did it in 40 in a row during the 1986-87 season. He also chipped in with five assists.

What’s most impressive about the streak is the sheer consistency, the lack of a true off game. That and the fact Durant just shrugs it off stand out most to coach Scott Brooks.

“I know when I had a three-game streak of four [points], I was worried about that fourth game,’’ Brooks said. “I had to make my first shot. He’s not worried about it. He’s worried about playing hard and playing the correct way and finding ways to help his team win. That’s what he’s done. He’s an amazing leader and he’s so consistent.’’

Westbrook had nine rebounds and nine assists, although he did struggle from the field. He was 5 of 14, and the Thunder shot 41.3 percent overall.

They had the touch from long range, hitting 13 of 25 3-pointers - three each by Durant, Westbrook and Caron Butler.

The Bulls never found their rhythm, shooting 34.5 percent overall, and settled for a six-game split on a tough homestand that included wins over defending champion Miami and Houston.

“I would have liked it better if we won a couple more games, but 3-3 we’ll take it,’’ Joakim Noah said. “We’ve just got to move forward. I wish we could have this game back.’’

Noah, who’s been hearing “MVP!’’ chants lately, had a rather quiet night, although he just missed his fourth triple-double of the season. He shot just 2 of 8 but finished with nine points, 12 rebounds and nine assists.

The Bulls missed their next 11 shots, and the Thunder scored 13 straight over the next 6 minutes and 30 seconds.