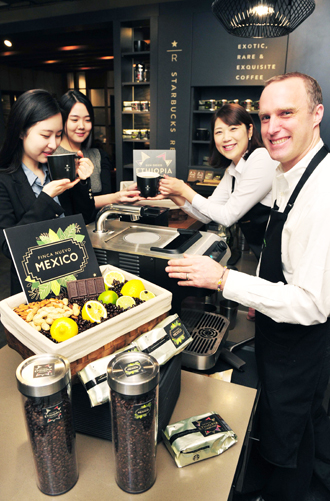 Starbucks Korea yesterday introduced a line of single-origin premium coffees known as Starbucks Reserve to local consumers at five of its 620 stores nationwide, a move that celebrates 15 years of business in the country.

Starbucks Reserve is the company’s most upscale coffee line, offered globally on top of everyday drinks, including house blends and promotional beverages.

“This year for Starbucks Korea is very meaningful because it’s the 15th year since we entered the market,” Lee Seok-koo, the chief executive of Starbucks Korea, said yesterday in a press conference at its Apgujeong Rodeo store in southern Seoul.

The venue is one of the five that has been selected to offer the Reserve coffee line. Stores in Sogong-dong; Jeoksun-dong; and Itaewon-dong, all in central Seoul; and Jeongja-dong, in Bundang, Gyeonggi, will also sell the line. One shop in Busan and another in Seocho, southern Seoul, are expected to offer Reserve coffees within the year.

“Ever since we opened our first store in front of Ewha Womans University in 1995, we have pursued steady growth and social responsibility. The Starbucks Reserve that we’re launching is a rare and precious coffee produced at a single origin and extracted cup by cup using the Clover [brewing system],” Lee said.

In 2008, the Seattle-based company acquired the Clover brewing system, which uses vacuum-press technology to brew the coffee, precisely controlling brewing time and the temperature of the pot.

According to Paik Soo-jung, the vice president and chief marketing officer at Starbucks Korea, the history of how the global coffee chain acquired the Clover system is mentioned in the book “Pour Your Heart Into It,” by Starbucks Chairman and CEO Howard Schultz.

“In the book, it says that Howard was in New York and encountered a scene in which a long queue was standing in front of a small coffee shop,” she said. “He tasted the coffee from that store, was amazed by it, and later on realized that the coffee was provided using the Clover machine.”

“The company has a plan as of now to offer [the premium Reserve line] at less than 1,000 stores globally,” Paik said.

In Korea, two types of Reserve coffee beans will be extracted using the Clover machine: the Finca Nuevo Mexico and the Sun-Dried Ethiopia Yirgacheffe.