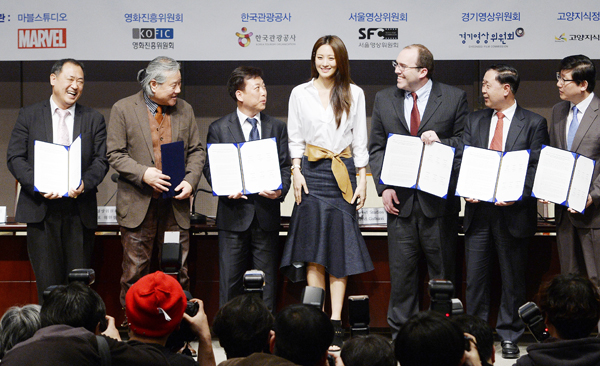 After months of speculation, Marvel Studios and Korea at last have announced the details of the filming of “The Avengers: Age of Ultron” that will take place in Seoul.

Marvel’s vice president of physical production, Mitchell Bell, who attended the ceremony, said that the reason for filming in Korea was the country’s association with “cutting-edge technology, advanced medical treatment and information technology.”

Another crucial factor was also the strong impression the country left on Marvel’s head Kevin Feige during a promotional visit last year for “Iron Man 3.”

At the time, when quizzed about the possibility of shooting in Korea, Feige said it was feasible, much to the excitement of fans, but the comment was considered just banter.

Yet Korea’s name came up again last month when a relatively unknown local actress, Kim Soo-hyun, was cast as a scientist in the new Avengers film.

Kim was also present at the MOU, although her appearance was brief.

Filming begins March 30 and will take place at some of the busiest parts of the city - the boulevards of Gangnam District in the city’s south, Mapo Bridge and the streets near World Cup Stadium in Sangam-dong, western Seoul. Seventy-two bus routes will be re-routed temporarily before filming finishes on April 9.

The Ministry of Culture, Sports and Tourism released details about the areas to be affected on its website.

According to the MOU, in return for the government’s cooperation, Marvel promised to portray Korea as “a high-tech, modern country and shall avoid portraying the Republic of Korea in any negative manner.”

The film, which stars Robert Downey Jr., Chris Evans, Scarlett Johansson and other big names, will reportedly create around 120 jobs for locals.

Ilgan Sports even predicts that the movie will lead to some 80 billion won ($74.9 million) being generated from tourism.

Other global locations where the film will shoot include London, Johannesburg and Aosta Valley in Italy.