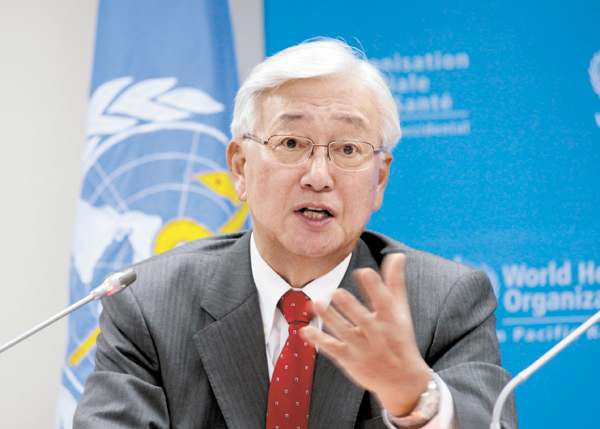 To date, just a handful of South Koreans have sat at the helm of the world’s most respected global organizations. Perhaps the most familiar include Ban Ki-moon, the current secretary general of the United Nations; Kim Yong, the president of the World Bank; and Lee Jong-wook, who served as the sixth secretary general of the World Health Organization (WHO) from 2003-6.

And though it may not be obvious, the secretary general for the World Health Organization’s Western Pacific Regional Office (WPRO) is an enormously influential position. The WPRO responds to public health issues across 37 countries, including Korea, China and Japan, covering approximately 1.8 billion people. Its employees surpass 700, and its budget for the past two years has reached $70 million.

Its secretary general, the head of the organization, is selected through votes by its member states.

Shin Young-soo, 71, a doctor specializing in health policy and management, was recently reappointed as the secretary general of the WPRO after completing his first five-year term.

Shin currently resides in Manila, the Philippines, though his overseas business trips often exceed 200 days a year on average. Despite the fact that he is eligible to fly first class, he often travels in business class. And when he visits remote areas in the Pacific region, he often has more than three layovers, and total travel time sometimes takes more than 24 hours.

But even with such a demanding schedule, Shin insists he enjoys traveling and does not tire easily.

The Sunday edition of the JoongAng Ilbo, the JoongAng Sunday met with Shin at the WPRO headquarters in Manila last month to discuss his career and current trajectory.

Q. How did you set foot in the WHO?

A. It started when I met Han Sang-tae, the executive official of the WPRO in 1981. In 1983, as soon as I got a job at the WHO through open recruitment, I met with Dr. Lee Jong-wook. In 1998, when the WHO was in the process of nominating a new secretary general, I cooperated with Dr. Lee in helping Gro Harlem Brundtland, the former Norwegian prime minister, win the election.

What was your relationship with Dr. Lee?

In 2003, when Lee was elected, I thought my role was over, and I even hesitated to visit the WHO headquarters in Geneva. I thought keeping my distance was the best way to help him. In 2006, when Lee suddenly passed away, I flew to Geneva, cremated the body and brought the cinerary urn to Korea and buried it in the National Cemetery. If Lee was alive, I would not have stood as a candidate in the WPRO election for secretary general.

How about meeting with World Bank President Kim Yong? How did that happen?

In 1987, Kim was pursuing a doctorate in medical anthropology after graduating from Harvard Medical School and came to my office.

I remember him saying he wanted to learn about Korea, since he migrated to the United States when he was 5. In our research class, for about a year and a half, he studied how medicinal treatments for Koreans and the Chinese differed from those for Westerners.

What is your most memorable moment as a health official?

It would probably be China’s H7N9 avian influenza (AI) epidemic and the devastation from Typhoon Haiyan in the Philippines. When I did genetic testing for the H7N9 virus, it was structured in such a way that it has the capacity to spread more easily compared to other AI virus strains. The good news was that, unlike the severe acute respiratory syndrome (SARS) outbreak in 2003, China has been coping well with AI, managing to keep it under control. It has not been found yet that H7N9 AI has spread from person to person.

Also, when Typhoon Haiyan struck, I was at a meeting in China, and I immediately came back to Manila. There were 4 million people left without homes due to the damage caused by the typhoon. The WPRO coordinated 100 relief teams from 30 countries. Korea is also engaging in relief and rescue operations with the Korea Foundation for International Healthcare, the Korea International Cooperation Agency and the military medical corps.

We are focusing on diseases such as malaria, polio and tuberculosis. The incidence of malaria in the WPRO region has reduced remarkably and has not yet reached the combat phase.

The WHO is also putting forth all its efforts to eradicate polio in cooperation with relevant agencies. Some WHO personnel in Pakistan have been killed in ambushes recently, because they were suspected by armed terrorist groups of being U.S. Central Intelligence Agency spies while implementing polio vaccination programs. The emergence of antibiotic-resistant tuberculosis is also a big problem.

Recently in Korea, the National Health Insurance Service has prepared for tobacco litigation. What do you think about that?

It’s good news for the WHO that the NHIS is filing a lawsuit. Tobacco accounts for a quarter of cancer cases here and 12 percent of deaths worldwide. About six million people die around the world due to smoking, and 600,000 people due to secondhand smoke. Although litigation is required, raising the cost of tobacco is urgent. The smoking rate in Singapore, Hong Kong and Australia is 10 percent or less. In these countries, a pack of cigarettes costs more than $10, and more than $15 in Australia.

On the other hand, the smoking rates in Korea, Japan and China are high while the price of cigarettes is low. In order to deter people from starting, a pack of cigarettes should cost more than $10. Raising the price is highly effective in reducing the smoking rate in younger demographics. To minimize health damage caused by smoking, it is crucial that people quit smoking before 30.

What are your goals for your second term in office?

I want to concentrate on creating a healthy city. I am cooperating with governments to establish 1,000 health cities, including 60 places in Korea and in the Western Pacific Region. A health city is a city where the health of citizens takes top priority in all decision-making. We have also set a goal of eradicating measles and lowering the prevalence of hepatitis B to less than 1 percent in children under the age of 5. Dealing with disasters and climate change is also important business, and so is the expansion of Medicaid insurance in member countries.

(Shin also expressed concern about the Polynesian Samoans having the world’s highest rate of obesity.

“The obesity rate is quoted at almost 90 percent,” he said. “About two to three years ago, I visited Samoa and met with supermarket owners, the minister of trade and the minister of agriculture and fisheries to talk about improving the nation’s diet.

In the past, the Samoan people used to eat Taro or fish, but when they didn’t bother to cook fish, they started eating fast food. Many of them even gave up farming. I ordered them to embark on health and nutrition education at elementary schools.”)

How many Korean staff members are there at WPRO?

When I was serving my first term, there were only three Koreans out of 600 employees. Now, it has expanded to 10. We just started an internship program, and there are quite a few Koreans among 100 interns.

How about operating funds?