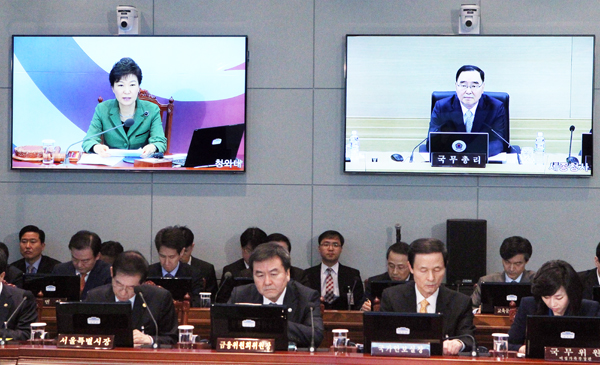 President Park Geun-hye presides over a cabinet meeting yesterday via video conference. She and cabinet members from ministries and government institutions based in Seoul and Gwacheon, Gyeonggi, communicated through a video link with officials in the Central Government Complex in Sejong City. By Byun Sun-goo

The president, who is set to travel to The Hague to take part in the third edition of the Nuclear Security Summit next week, stands at the brink of meeting international leaders empty-handed, a situation that would likely be seen as an embarrassment for Korea, which hosted the previous nuclear summit two years earlier.

In a cabinet meeting conducted via video conference, Park directly expressed her regret over the fact that Korean lawmakers have been postponing the bill’s passage.

“The Nuclear Security Summit takes place every two years, and it is important for us to take it as an opportunity to fully demonstrate our diplomatic capability, given it is hard to predict how North Korea’s nuclear weapons will be diverted within that two-year period,” she told cabinet members.

“But it is truly shameful that the National Assembly has not passed the bill in tandem with other bills.”

Bringing the amended Convention on the Physical Protection of Nuclear Material into force is one of the priorities of the upcoming summit in the Netherlands, with the prerequisite being the international community’s ratification of crucial nuclear treaties.

The bill was proposed in August 2012 and so far has not been approved by the Assembly’s Science, ICT and Future Planning Committee, which covers any related bills.

A nod from the committee is only one of the beginning steps in the legislation process.

The president’s remarks follow Prime Minister Chung Hong-won’s series of meetings on Monday with Assembly Speaker Kang Chang-hee, and Jun Byung-hun and Choi Kyung-hwan, the floor leaders of the main opposition Democratic Party and the ruling Saenuri Party, to persuade them to hold an extraordinary session this week to pass the bill.

“The entire world is watching North Korea [and its nuclear capabilities], and if we fail to keep the promise we made before concerning nuclear security, let alone taking the lead in that matter, how much confidence will we be losing internationally?” Park said in the meeting.

“Also, will we gather power when it comes to asking for international cooperation concerning nuclear security?” she added. “[The failure to pass the bill] will immensely damage national interest, essentially. I ask you to pass the bill as soon as possible.”

Only three business days remain before Park departs for Europe on Sunday morning. The Assembly yesterday agreed to hold a temporary meeting tomorrow afternoon at the request of all of the members of the Saenuri Party, which has the majority.