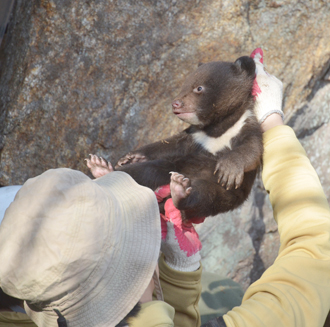 Veterinarians check the health of a cub yesterday at Mount Jiri. The Ministry of Environment and the Korea National Park Service announced yesterday that three endangered Asiatic black bears living at Mount Jiri gave birth to five cubs from February to March, which is the largest number of newborn bears produced in the same year, increasing the number of the bears living on the mountain to 35. [NEWSIS]