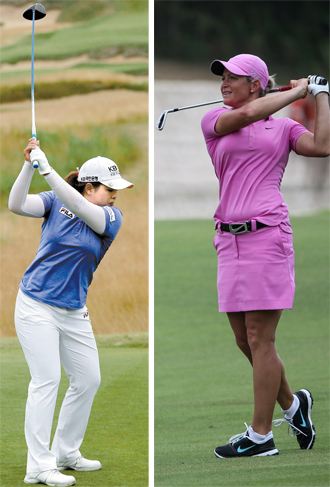 Four LPGA tournaments sponsored or co-sponsored by Korean conglomerates will be staged over the next five weeks, including the Kia Classic, the Nabisco Kraft Championship - which has a Korean sponsor - and the Lotte Championship.

But first up is the JTBC Founders Cup, which tees off tomorrow morning in Phoenix, Arizona. JTBC is the broadcasting arm of the JoongAng Media Network.

The Kia Classic, sponsored by Kia Motors, begins March 24 in California, and the Lotte Championship will be held from April 13 to 19 in Hawaii.

The Kraft Nabisco Championship, one of the five LPGA majors, will run from April 3 to 6. It is obviously not named after a Korean conglomerate, but the Los Angeles branch of the JoongAng Ilbo will be a sub-sponsor.

All these events are quite popular on the LPGA tour and are set in locations known for good weather and superb landscapes, which helps attract larger galleries and higher ratings.

But more importantly than beautiful weather and landscapes, these tournaments are slated to showcase many of the best female golfers in the world. In the JTBC Founders Cup, for instance, most of the top 20 golfers in the world will compete, including world No. 1 Park In-bee, No. 2 Suzann Pettersen of Norway, No. 3 Stacy Lewis of the United States and No. 4 Lydia Ko of New Zealand. Other golf sensations like Choi Na-yeon, Michelle Wie and Cheyenne Woods, niece of Tigers Woods, will also show off their skills in the event.

But Shin Ji-yai, who was once the world’s No. 1 female golfer, will not be there as she has turned in her LPGA membership to focus on the Japan tour this season, and Jang Ha-na, the top golfer in the Korean LPGA last year, was not eligible to compete in the event because she does not have an LPGA membership yet.

The focus on the Wildfire Golf Club-located JTBC Founders Cup, which comes with a total prize purse of $1.5 million, is the rivalry between the 2013 Rolex Player of the Year Park In-bee and Pettersen, as well as whether Lewis will be able to defend her title. Lewis claimed her second victory of the 2013 season at the Founders Cup with an impressive nine birdies to card a final-round 64 and claim a three-stroke victory over Ai Miyazato.

In the Ladies European Tour’s World Ladies Championship at Mission Hills earlier this month, Park maintained her 48-week reign as world No. 1 with a five-stroke victory. Pettersen and Lewis are trying to chase down Park. They trail her by 0.92 points and 2.03 points, respectively.

Since these tournaments are held in western United States, fans in Korea won’t have to stay up late into the night to watch, like they used to do, but they will be able to watch them on television in the morning. The final round of the Lotte Championship will be staged on Saturday local time, which is Sunday morning in Korea, a change made to accommodate Asian fans.

Korean golfers are happy to see the names of such familiar companies. Before the Korean conglomerates came around as sponsors, some saw Korean golfers as “prize-money hunters,” but with the rise of Korean sponsors, Korea’s golfers are now viewed as part of the LPGA tournaments.

“If more Korean conglomerates become sponsors of the LPGA tournament, Korean golfers will certainly perform much better,” said Park Geon-gyu, the father of Park In-bee. “It gives them more confidence and motivates them to play better.”