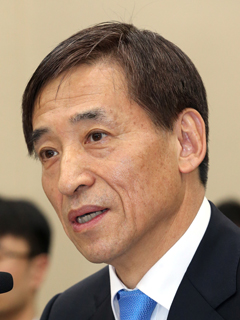 The first priority of the new central bank governor will be to restore its creditability through clearer communication with the market.

At his first confirmation hearing at the National Assembly, Bank of Korea governor appointee Lee Ju-yeol said he believes there was miscommunication in the recent past from the central bank on its monetary policy that confused the market.

“Because of signals coming from the central bank, expectations were building in the market that the key interest rate would be lowered in April,” Lee told lawmakers.

“Considering there was a gap between what the market expected and what the BOK did, I believe there is a problem in communication.”

In early 2013, the new Park Geun-hye administration put pressure on the central bank to support its aggressive economic expansion campaign by lowering the key interest rate.

However, the BOK remained steadfast by keeping the interest rate at the same level before unexpectedly shaving off 0.25 percentage points in May.

Although outgoing governor Kim Choong-soo was recognized for several achievements during his four-year tenure, including reorganizing the central bank to be more competitive and elevating cooperation with overseas institutions, communication was never his strong suit.

In fact, he was often criticized for vague statements and misleading signals.

It even came to a point where Kim had to make a self-deprecating reference to his flaw, saying he always signals right before turning right.

During a press briefing after his last monetary policy committee meeting last week, Kim said he tried to break down the wall between the central bank and society.

At yesterday’s confirmation hearing, successor Lee emphasized the need for good communication and said the public’s trust is most important when setting a target for inflation and price stability.

He added that, during his term, he will not only find a balance between stable inflation and growth but also build up the public’s trust and continue global financial cooperation.

When asked what the biggest problem facing the Korean economy today is, Lee cited falling growth potential, worsening gaps among various industries and companies, and the growing household debt.

When queried whether or not the job market is the biggest problem, Lee said that it is part of the falling growth potential.

“I believe the role of the government and companies are important regarding jobs,” Lee said.

“Equally, creating an environment so companies can pursue their functions without anything holding them back will contribute to expanding jobs.”

Lee is the first governor-nominee to undergo a public confirmation hearing in the central bank’s 60-year history after a change in the law in 2012.