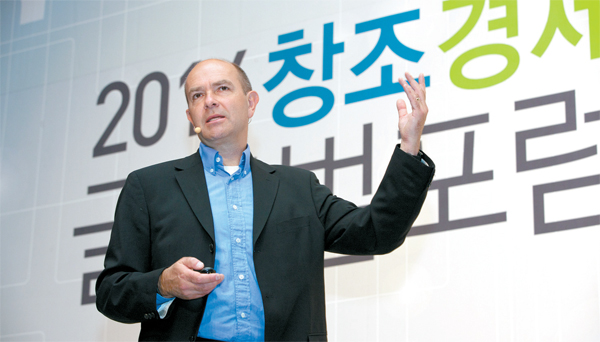 Chris Anderson, CEO of 3D Robotics, was a keynote speaker at the Global Forum on Creative Economy at the Lotte Hotel, central Seoul. Provided by the ministry

Chris Anderson, the best-selling author of “The Long Tail” and “Free” and a former editor in chief of Wired Magazine, said Korean companies should form a business environment with a more open attitude toward sharing ideas, sources and platforms, especially in the software industry.

Anderson visited Korea as CEO of American tech venture 3D Robotics to give tips on creating an open business ecosystem to encourage start-ups. As part of government efforts to obtain advice from international start-up experts, the Science Ministry yesterday held the 2014 Global Forum on Creative Economy at the Lotte Hotel, in Sogong-dong, central Seoul.

Anderson’s advice was simple: “I know I sound crazy, but it works. You give it away, and it will give back more in return. Not always, but enough.”

“As the market becomes more complex, no one company can come up with all the answers. Companies have to co-operate for open innovation by utilizing each other’s ideas and platforms. If there’s more hands, there will be an answer,” he added.

Sharing key sources and staying strong in the market is possible in the sense that while followers create similar content that broadens the market and makes it more competitive, the original creator can focus on extended innovation instead of spending time and resources to fight for patents, said Anderson.

In order to accomplish that, taking control of the entire ecosystem is essential, he said.

Google had to buy patents to protect itself from competitors like Apple. However, the open part of the Android system was a larger success, allowing countless software developers to come up with content that is only compatible with the world’s largest mobile operating system. He said such an open source ecosystem eventually gave Google a larger share of the mobile operating system market.

The sharing approach is also efficient in enabling innovation faster than the traditional business practice that takes a closed approach, because the content is publicized and top talent in the area can participate in the innovation process.

He pointed out that Korean smartphone makers like Samsung Electronics, which excels in hardware, should join the open ecosystem effort and strive to fill their devices with their own applications like China’s Xiaomi.

When asked if open innovation could push new start-ups and their potential investors into greater risk of failure or their ideas being stolen, Anderson said sharing is an effective method in reducing such risks.

In the ecosystem, start-ups can test marketability before receiving or asking for investment. He added that such a practice allows start-ups to become more objective and therefore reduce the chances of business failure.