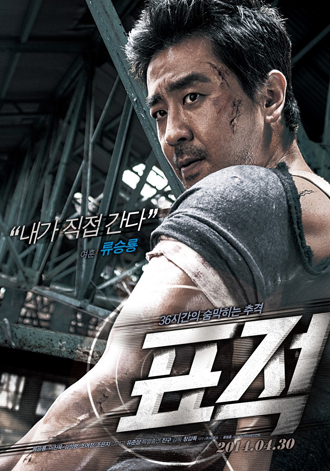 Next month, actor Ryu Seung-ryong will return to cinema alongside some of the most prominent actors on the entertainment scene.

Titled “The Target,” the film follows the story of Yeo-hoon (Ryu) as he becomes falsely accused by detectives in a mysterious murder case. Actor Lee Jin-wook, 33, joins Yeo-hoon as a doctor named Tae-joon, to save his abducted wife.

Ryu become Korea’s No. 1 movie star last year, thanks to the huge success of the film “Miracle in Cell No. 7,”which gained more than 10 million admissions.

Although the detailed synopsis of the film has not yet been revealed, Korean movie fans and the press have shown a great interest in the coming film because it also features actors Kim Sung-ryung of SBS drama “The Inheritors” (2013) and Yoo Jun-sang of the musical “Frankenstein” (2014) as detectives who attempt to chase down Yeo-hoon.

“The film is a loose adaptation of the 2010 French thriller film ‘Point Blank.’ But viewers will still be able to enjoy the film, as the Korean version will change some of the plot to please fans at home,” said the film’s distributor, CJ E&M, on Tuesday.