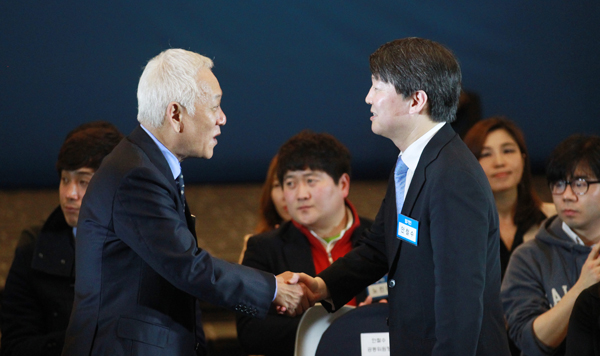 The Democratic parties in Korea and the United States have the same name and they both have used a “shifting of ideas” to come to power, but the means they used to get elected were quite different. In America, the Democratic Party made John F. Kennedy, an Irish Catholic, the president of a country traditionally dominated by Anglo-Saxon Protestants. Jimmy Carter, once the governor of Georgia, a conservative southern state, won the presidency as a Democrat. Bill Clinton wrote in his autobiography “My Life” that when he was a student, his professor used to say that anyone except for an Arkansas native would understand what he said. But the governor of Arkansas became the president at age 46. Five years ago, Barack Obama became the first African-American president of the United States. The Democratic Party expanded its boundaries by breaking through the limits of religion, region and race.

But the Democratic Party of Korea came to power through methods that were unheard of. Former President Kim Dae-jung made a coalition with Kim Jong-pil, and Roh Moo-hyun was chosen as a single candidate through a consolidation process among the opposition. While the coalition did not succeed, Sohn Hak-hyu, the former Gyeonggi governor and Grand National Party member, joined the Democratic Party in 2007. For the presidential election two years ago, independent politician Ahn Cheol-soo supported the Democratic Party candidate. For the coming regional election, the DP and the Ahn group are coming together as the New Political Democratic United Party (tentative English name).

The difference between the two Democratic parties is as wide as the Pacific Ocean. The Democratic Party of America finds its leaders from within, while the Korean DP seeks leaders elsewhere. Kennedy began his political career as a congressman representing Boston, the historical city of the Boston Tea Party, the symbolic incident of American independence. Carter garnered nationwide spotlight when he defeated a Republican rival in the gubernatorial election and advocated the ending of racial discrimination in his inaugural speech. When Clinton was the governor of Arkansas, he had a plan for a greater future. President Obama was a state senator from Illinois.

From the point of party politics, the model pattern would be for a party to nurture good politicians, serve the voters, expand the party and then the party nurtures more politicians. However, Korea’s DP is increasingly seeking help from outside the party.

It argues that it has to find an outside helper due to the “slanted ground.” As the ground is not level, they can barely compete with the conservative ruling party with just numbers - they need to bring together all the available people. But that only proves its weakness. The DP should have nurtured its own presidential hopefuls who can overcome the slanted ground.

Both the Democratic parties in Korea and America are political parties. But the American Democratic Party raises its presidential candidates from within, while its Korean counterpart has gotten used to the spotlight by attracting dark horses from the outside. The proud name of Democratic Party will be gone by next week, and it is partly because the party doesn’t know how to raise future presidents.