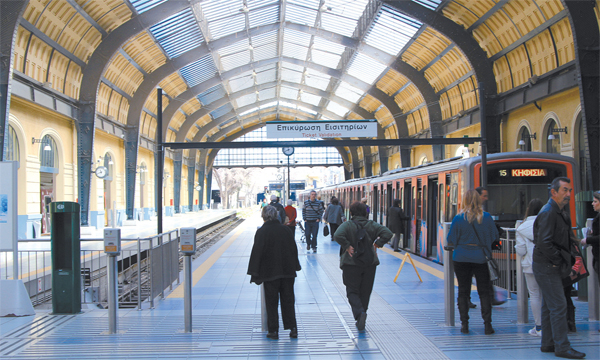 The subway and bus system in Athens will replace their conventional paper ticketing with an e-ticketing system to be set up by a consortium involving LG CNS. Provided by the company

It is the first transportation fare collection project in Europe for the Seoul-based IT solution company. LG CNS President Kim Dae-hoon has emphasized overseas expansion this year.

Under the project, overseen by the Athens Urban Public Transport Organization (OASA), LG and its partner, Terna Energy of Greece, will install and operate the automatic fare collection system for the bus, trolley and subway system. Like T-Money in Seoul, the smart ticket project will replace conventional paper tickets, the company said.

The transition will take 12 years, and during the first two the consortium will set up e-transportation card panels on buses and at subway stations.

Over the following 10 years, the consortium will be in charge of operation of the infrastructure for the traffic card and fair adjustment system.

The consortium and two competitors won approval from the OASA for their interim bids in 2011, but the process was delayed for two years by Greece’s economic crisis before resuming in April 2013.

Cubic, a leading U.S. fare adjustment system provider, vied with LG-Terna consortium, forming an alliance with a Greek company, Intracom. The other competitor was Thales, a French giant, and its Greek partner, Metka. Partnership with a Greek company was compulsory.

The project is significant in that it beat companies that dominate the e-ticketing solution market in Europe and overcame high technological barriers there, said Oh Sae-chon, vice president of the public relations unit at LG CNS.

“LG CNS will perform the project successfully by mobilizing every technology available that has been tested at home and abroad and continuously lead Korean IT companies’ bids to make inroads in Europe,” said the LG CNS president in a statement.

LG CNS, which brought the T-Money system to Seoul in 2004, won a project to install a transportation fare collection system in Wellington, New Zealand, in 2008, and a similar contract in Bogota, Colombia in 2011.

According to LG, the Athens project was on the agenda for a summit between President Park Geun-hye and Greek President Karolos Papoulias in Seoul in December.

“It is an epitome of Korea’s creative economy initiative and sales diplomacy,” said Kim, giving credit to the Blue House, Foreign Ministry, Seoul City and Korea Eximbank, which will help fund the project along with the European Union Fund, said LG’s Oh.

LG CNS said it is also bidding to upgrade the smart public transportation fare system in London. The London project, which is worth 1.6 trillion won ($1.5 billion), will likely award a contract late this year, it said.