Long-troubled shippers have that sinking feeling

Long-troubled shippers have that sinking feeling 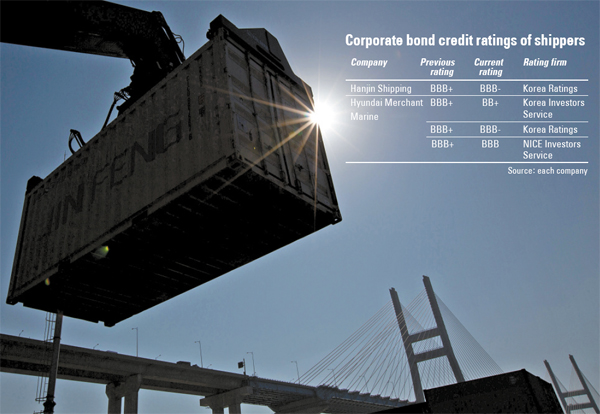 Both shippers have been in the red for the past three years, along with the rest of the industry. Hanjin Shipping and HMM each had more than 710 billion won ($662 million) in net losses last year. They have announced restructuring plans that mostly involve the sale of assets, but their situations are deteriorating.

Credit rating firms announced Monday they have downgraded the ratings of Hanjin Shipping and HMM’s corporate bonds due to negative speculation on their competitiveness.

They also pointed to concerns about the “acceleration clause” in their corporate bond contracts that requires them to pay off the bonds immediately if their debt ratio exceeds 1,000 percent. Last year, Hanjin Shipping’s debt ratio was 1,444 percent and HMM’s 1,397 percent. If investors demand their money under the “acceleration clause,” the two companies have to repay the bonds immediately. In addition, both shippers’ short-term loans due at the end of this year are more than 3.1 trillion won.

In particular, Korea Investors Service (KIS) announced that it has dropped HMM’s credit rating from BBB+ to BB+, a junk grade.

“If the sale of HMM’s core business unit is completed, financial stability will improve somewhat and the company can expect positive results in the short term in the area of liquidity. But, in the long term, business stability and competitiveness can worsen,” the company said in a statement. “While the pressure of paying back loans is an aggravating factor, financial risks are getting bigger as HMM’s debt ratio is more than 1,000 percent.”

But what’s giving a headache to Hyundai Group - the nation’s 20th-largest conglomerate, led by Chairman Hyun Jeong-eun - is the impact of HMM’s credit rating plunge on the group’s other affiliates.

KIS said that because Hyundai Group has a circular shareholding structure, one company’s financial risks can be transferred to others.

In exchange for buying HMM shares, Hyundai Elevator must compensate financial companies under the contract if its HMM stock is worth less than when they bought it at the end of the contract.

The situation is no different for Hanjin Group, the country’s ninth-largest conglomerate.

According to finance industry sources, Hanjin Group will again sign a capital structure improvement agreement with creditors because of poor financial results in 2013. The group has been signing the deal annually since 2009.

Through its core affiliate, Korean Air Lines, Hanjin Group already injected 250 billion won into Hanjin Shipping last year and will supply an additional 400 billion won by entering Hanjin Shipping’s capital increase and issuing new stock in the first half of the year.

To improve its financial soundness, KAL announced in December a restructuring plan to raise 3.5 trillion won by selling assets.

The company already saw its credit rating go from A to A- in a Korea Ratings’ evaluation in November, but industry insiders suspect it will drop again if Hanjin Shipping doesn’t make a significant improvement in its financial condition.

The two groups are complaining that the lower corporate bond credit ratings are making it more difficult for them to rebound. However, experts said the companies should not be bothered by the downgrade and urged them to stick to their financial restructuring plans.

“What’s more important than adjusting credit rating is whether these groups can actually follow their self-imposed financial restructuring plans and speed up the execution,” said Jeong Dae-ho, an analyst at KB Investment and Securities, in a report on Tuesday. “Investors should also look carefully whether they can get support for corporate bond conversion in near future.”