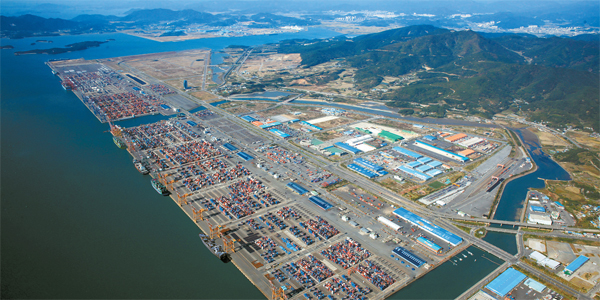 An aerial photograph of the Gwangyang Bay Area Free Economic Zone. Provided by the company

This month marks the 10th anniversary of the successful foundation of the Gwangyang Bay Area Free Economic Zone (GFEZ), but there are still plans to improve the district further, according to the organizational authority behind the business complex.

GFEZ is one of Korea’s oldest economic zones, which are areas created to boost the regional economy and encourage foreign investment by offering tax incentives and eased regulations.

During the past decade, the GFEZ’s authority has excelled in its role of developing the zone by implementing corporate-friendly policies and attracting investment.

Its endeavors have even been recognized by the Ministry of Trade, Industry and Energy, which selected GFEZ as a runner-up in a governmental free economic zone evaluation four years in a row.

The economic area at Gwangyang Port, on of the five districts of GFEZ, has already processed more than two million containers in the 16 berths for four consecutive years and will expand to 34 berths in 2020. The other four districts are Yulchon, Shindok, Hwayang and Hadong.

The lots available in Yulchon District’s Yulchon Industrial Complex and Sindeok District’s Sindae Hinterland sold quickly to both domestic and international companies. As a result, 76 percent and 98 percent of Yulchon and Sindeok are full, respectively.

To satisfy further demand, the construction of six industrial complexes in 15.2 square kilometers (5.87 square miles) of land is also under way.

With the continued success of the complex, transport infrastructure has been put into place to make it even easier to reach the complex. The new expressways connecting Suncheon and Wonju and Mokpo and Gwangyang, along with the opening of Yi Sun-sin Bridge, will make traffic lighter than ever. Investors have so far responded positively to the efforts of GFEZ, which has managed to attract 151 companies and $12.7 billion in investment. 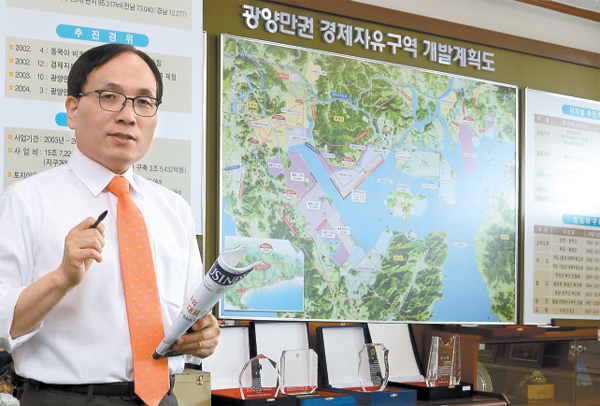 The zone has also created 32,000 jobs - an accomplishment considering the international market’s anemic business conditions that have continued for years.

The GFEZ Authority, however, is seeking to progress further. It aims to receive $25 billion in investment, process 12 million containers annually, generate 240,000 jobs and gather 120,000 residents by 2020.

The big picture is to cultivate Gwangyang Bay into a logistics hub for Northeast Asia and to form new industrial clusters to make it the largest production base in the nation.

Advancing the materials industry in Korea, a goal shared by the Park Geun-hye administration, is also important to GFEZ. The construction of a chemical materials cluster will begin this May after confirmation is received from the central government.

A foreigner-exclusive materials industrial complex is also being proposed to the government to encourage more investment from overseas. The Park administration’s three-year economic innovation plan will trigger deregulations and vitalize businesses in the hub.

GFEZ is home to many other industries, too, and the zone’s authority is ensuring companies with promising prospects will settle in the industrial complex’s respective areas. For example, Gwangyang District will specialize in the international logistics and bio-packaging industry; Yulchon District will cater to the companies that manufacture petrochemicals and high-tech materials; and Hadong District will feature companies from the offshore plant and shipbuilding industry.

Other districts will provide public infrastructure. Sindeok District will provide a business and commercial complex with housing, while Hwayang District will include a downtown area with tourism, shopping, education, medical facilities and housing.

Meanwhile, the GFEZ Authority is devoted to creating a business-friendly environment, and each company in the zone is provided with business counselors. Promotional sessions will be held to help support policies implemented in the area.

The objectives for the next 10 years are to continue expanding the industrial complex and its support system.

Various cultural and business facilities are being brought in for foreign workers settling in the area. A branch of Maple Leaf Foreign School will settle in the area and health care institutions, which will provide further quality of life to local residents, are to be established.

A general test institute for marine plants and a graduate school under the University of Aberdeen in Scotland is under construction to turn the Hadong Galsa Bay Shipbuilding Industrial Complex into a research, development, education and production cluster for the high-technology industry.

Health checkups for employees of resident companies are already available at GFEZ, and on March 7, a $200 million contract was signed to build a hospital and an international nursing college in Sindeok District.

For nature lovers, there are plans to connect Hallyeohaesang National Marine Park and Dadohae National Park to the area for more leisurely coastal tourism.

Lee Hee-bong, the commissioner of GFEZ, aims to make Gwangyang Bay the world’s top place for industry, logistics and tourism. “Gwangyang Bay certainly has a great potential with all the favorable geological conditions,” said Lee.