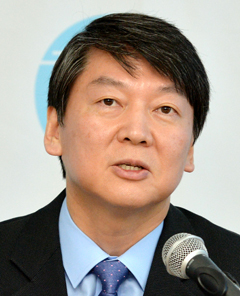 In an effort to contain open hostilities from the Democrat Party over inter-Korean relations policy, first-term lawmaker Ahn Cheol-soo issued a statement yesterday proclaiming he has always honored the spirit of the two Seoul-Pyongyang summits and will adhere to their principles for the course of his political career.

Calling the unfolding dispute an “unexpected” glitch in negotiations over a platform for a new party being formed by his followers and the DP, the former presidential hopeful said he never asked for the new party to repudiate the two summits, which were attended by presidents Kim Dae-jung and Roh Moo-hyun and North Korean leader Kim Jong-il.

“Since well before the presidential election [in 2012], I have always said we should adhere to the principles of the June 15 [2000] and Oct. 4 [2007] summit declarations [by Kim and Roh],” Ahn said in a statement. “And I believe that the new party should also embrace such spirits.

“I am sorry that such controversy has erupted like this,” the former software tycoon said. “I ask you to wait until the final version of official policy principles is made.”

Ahn’s statement yesterday came after a number of DP insiders expressed ire over his alleged demand to play down the inter-Korea summits in the official policy platform of the new party.

Ahn’s camp wanted to put more emphasis on national security and pursue a harder stance on the North.

Moon Jae-in, who outmaneuvered Ahn to be the sole liberal candidate in the 2012 presidential race, jumped into the unfolding feud yesterday. Moon is the de facto leader of the pro-Roh faction inside the DP.

“The joint declarations of June 15 and Oct. 4 summits are not merely historical records but are guidelines for the two Koreas’ relations in the future,” Moon told reporters at the National Assembly yesterday.

Moon mentioned a remark by President Park Geun-hye comparing reunification of the two Koreas to a jackpot.

“With the Park government talking about how it will be like hitting a jackpot with unification, the opposition is responsible for advancing the issue [inter-Korean relations],” Moos said. “It will not be appropriate for the new party to skip mentioning the summits in its official policy platform.”

The DP and the Ahn camp have succeeded in coming up with a new name for their party - roughly translated as the New Political Democratic United Party - but they have made little progress in agreeing on policy, principles or organizational structure.

Many DP members consider North Korea policy a defining issue for the party. The DP, the country’s second largest political entity, commands the loyalty of 126 lawmakers while Ahn’s camp has only two sitting lawmakers: Ahn and independent Song Chang-ho.

Representative Han Jeong-ae, a spokeswoman of the DP, tried to play down the dispute between the two sides, alleging the controversy stemmed from a simple mistake. “It seems that officials in Ahn’s camp did not show him the first draft of a proposal for a policy platform,” Han told the Korea JoongAng Daily at the National Assembly yesterday. “The new policy platform will embrace the spirits of the summit meetings. That I can assure you.”

Meanwhile, a New Political Vision Committee comprised of nine academic and civic group figures unveiled its first set of recommendations for the party’s policy platform. The committee was created by a joint preparatory body chosen by the DP and Ahn’s camp.

The committee called for an increase in the number of proportional lawmaker seats in the National Assembly to better reflect public opinion. It also proposed a performance-evaluation team comprised of nonpolitical figures to help choose party nominees for general elections.