A mix of han and heung

A mix of han and heung 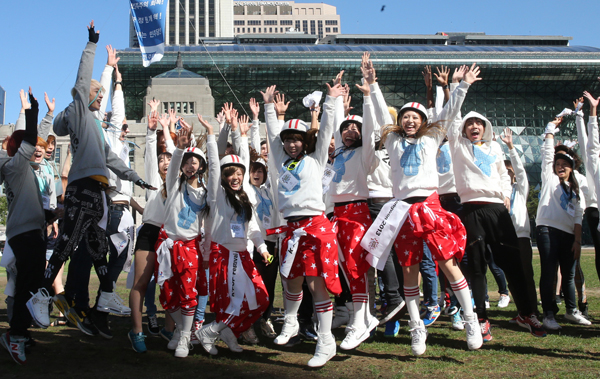 A flash mob in front of Seoul City Hall made by foreign contestants for the final round of “2013 K-Pop Festival in Gangwon.” Rather than the han, K-pop more reflects heung, a spirit of dynamism and energy.[JoongAng Ilbo]

Koreans say the word “han” best sums up the Korean sentiment, but I wonder how it can be defined. The Chinese character for han does not represent the feeling appropriately. In Chinese, the character for han is only used for negative connotations, meaning hatred or a grudge. Koreans are kindhearted and polite, so I wondered if they had internal hate or grudges.

When I had a discussion on history with a Korean friend, I joked, “Chinese students find history the most challenging subject. Because of frequent conflicts, no dynasty lasted more than 300 years.”

I added that compared with Chinese students, Koreans would have an easier time studying history, as both Joseon and Goryeo lasted more than 500 years each, and the Silla Dynasty continued for a thousand years. But my friend said, “I like history but felt a bit sad when I studied Korean history. Koreans have lived with frustration for a millennia.”

So I became curious about Korean history. While history textbooks in China devote many pages to the United States, Europe and Japan, Korean history is only mentioned in a few sentences. So I read a Korean history book that night. Chinese people find the Song and late Qing dynasties unpleasant because of foreign invasions; similarly, Korean history had a series of ordeals and invasions.

Then I learned about the Korean folk song “Arirang.” As the sorrowful melody filled my room, I felt moved and sad. “Arirang” is supposed to describe the sentiment of han the best, and I became more familiar with the emotion. I became curious again. Is han closer to “grief” than “hatred”? I began listening to pansori and madanggeuk, traditional music genres. “The Story of Chunhyang” got me closer to how Koreans feel.

The core of China’s traditional folk culture is grandeur. They are mostly epic stories about heroes. In contrast, Korea’s traditional folk culture is about the simple lives of average people. They seem to have accumulated regrets, frustrations, sorrows and grudges, like the internal and external discords of the country. The Korean people have lived with frustrations and sorrows for thousands of years.

However, I remember my friend saying, “Koreans never lost hope despite those ordeals and continued to persevere. Because of the sentiment of han, Koreans may have been able to accommodate Western culture rapidly and accomplished the ‘Miracle of the Han River’ that amazed the world.”

In the new millennium, Korea has changed. Rather than the sentiment of han, I think “heung,” the explosive energy to relieve old grudges and frustrations, suits modern Koreans better. Instead of the old folk songs of a “7080 Concert,” the dynamic dancing and music of “Music Bank” has gained popularity worldwide. The spectacular and colorful sentiment of heung represents the egos of contemporary people today.

Han and heung coexist in Korean culture and psychology, as well as in their actions. From a foreigner’s perspective, Koreans seem to have two contradictory tendencies at the same time. Koreans are impulsive and short-tempered personally, but they display solid patience and obedience within the organization they belong to. When working, Koreans are serious and diligent, but when they go out for drinking, they like to sing and dance and enjoy the moment. The power of Koreans can be found when they turn han into heung.

*The author is an instructor at the Korea National Diplomatic Academy.