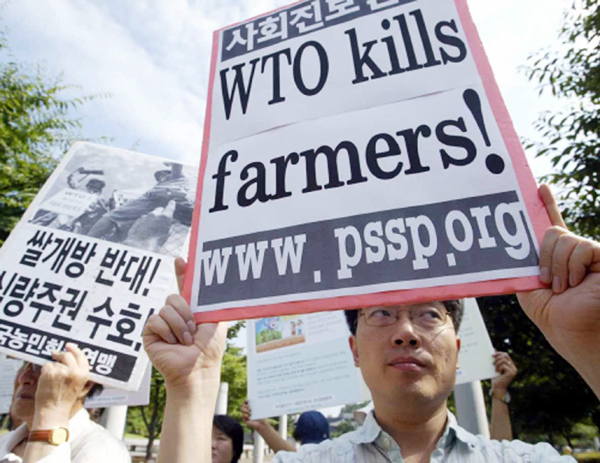 People protest the opening of the rice market in 2004 when the government signed agreements with rice producers like the United States and China to defer full liberalization for 10 years. Korea must report its phase-out liberalization plan to the World Trade Organization by September. [REUTERS/NEWS1]

There are more than 1,000 Asiatic black bears, also known as moon bears, living on farms around the country in cages so small that they can hardly move. The bears are farmed for their bile and gall bladders, which are sold as Asian traditional medicine. About 500 were first brought into the country from Russia and Southeast Asia under a government promotion to help increase rural livelihoods. Farmers were attracted by the idea that they could earn a good amount of money by breeding the bears and exporting them. The business went downhill from 1993 after South Korea joined the Convention on International Trade in Endangered Species of Wild Fauna and Flora, which identifies moon bears as an endangered species and bans their international trade. Korean farmers no longer could export the bears and killing them also came under scrutiny. With government neglect, the trade in traditional medicine grew over the years. Now farmers are running out of space and money to take care of their animals properly.

The wretched story of Korea’s moon bears is a vivid example of the disastrous consequence on the market from a failed import policy. Thoughtless imports can become redundant and crowd warehouses, hurting an overall market.

The rice market is no different. South Korea in 2004 signed agreements with rice producers like the United States and China, deferring full liberalization for 10 years while agreeing to purchase up to 408,700 tons (901 million pounds) of rice under the Minimum Market Access obligation. The import supplies are about 10 percent of Korea’s total rice yield last year of 4.23 million tons. The government promised to use 10 to 30 percent of the highest quality foreign rice to produce dduck (rice cakes) or makgeolli, a native alcoholic beverage made from a fermented mixture of rice and wheat, while strictly keeping the rest from entering the consumer market lest it disrupt prices of domestic rice.

Because of decreasing consumption of rice as a staple, rice imports only piled up and rotted in warehouses. The government declines to comment on the exact size of the stockpile, but rice imports have become as big a headache as the moon bears.

By the end of the year, South Korea will reach its deadline to open up the rice market. It must report its phased liberalization plan to the World Trade Organization by September.

What are the government’s options? Will it argue for a longer grace period by offering to increase the import quota? It would be wiser for the country to gradually open the market after levying tariffs instead of keeping up with obligatory government purchases. Local rice costs about 2.5 times more than imports. When hit with a protective tariff of more than 200 percent, foreign rice will cost more than local brands. If imports are more expensive, they won’t be competitive against domestic rice or pose any threat to the farming industry. Neighboring rice producers like Japan and Taiwan have already opened up their rice markets.

Some say we should send superfluous rice to feed poor North Koreans. We run separate tariff-free trade with North Korea. But under WTO regulations, inter-country trade must be subject to tariffs. In order to provide tariff-free rice to North Korea, we would first have to solve the incongruity with international law.

We also must take into consideration the changes in our eating habits. A South Korean on average ate 67.2 kilograms (148 pounds) of rice last year, a record-low rice consumption per person. Rice is even being replaced by hamburgers and other food items on military menus. It would be useless to beg our people to eat more rice when they have today a choice from food items from around the world.

I wrote a similar column 10 years ago when Korea struck agreements with major rice exporters. But we have yet to solve the failed import problems of moon bears and foreign rice. Our agricultural industry could be revived with greater competitiveness if the market worked on real demand and supply, reflecting changes in consumer needs and lifestyles. The government should stop fretting about keeping the gates closed and start coming up with practical solutions for once they are open. Liberalizing the rice market with effective tariffs would be a good option. If we are so concerned about our rice industry, we should eat some more rice instead of whining and worrying.

*The author is the planning editor of the JoongAng Sunday.