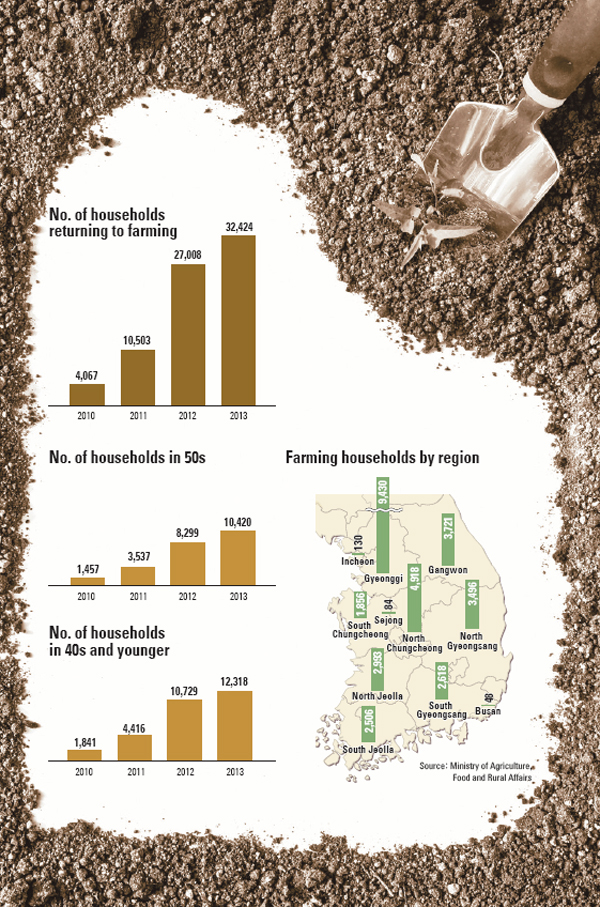 The number of households (people or couples) that returned to farming or to a home village showed its largest-ever growth last year and shows signs of further accelerating an era of farming as an occupation for retirees.

According to a report released by Statistics Korea yesterday, the number of households that left urban areas in a bid to start farming and spend the rest of their lives in their home areas surged about 20 percent to 32,424 compared to a year earlier.

A major reason for the trend is an increasing number of Koreans who are retiring earlier than planned as part of the delayed impact of the 2008 global financial crisis.

By age, households with members in their 50s accounted for 10,420 of the total number of moves, the largest number of any age decade. But households led by people in their 40s and younger, taken as a group, numbered 12,318.

“While it is desirable to see that people in their 50s are trying to reclaim their life values through farming after retirement, it is even more encouraging that young people are going to farming areas, contributing to maintaining the competitiveness of the agricultural industry and rearing future farmers,” said an official at the Ministry of Agriculture, Food and Rural Affairs.

By province, Gyeonggi has the largest number of such households, 8,499, followed by North Chungcheong, Gangwon and North Jeolla.

A goal of the Agriculture Ministry is to develop the farming industry into a creative one, combining processing and tourism to create more added value.

Those efforts are already paying off, the ministry said.

A 33-year-old man who started farming in 2011 increased his profits by selling typhoon-stricken apples in online markets and developed his own apple brand, logo and packaging boxes. Last year, he earned 100 million won in revenue through online sales, according to the ministry.

A ministry official said, “Utilizing the Internet in the agricultural field can give young farmers new ideas that can generate profits.”

The ministry plans to expand its system of internships for those who want to begin farming by raising the current age limit from 39 to 49. Through 158 farming work force centers across the nation, the government says it will help those who plan to return to farms find jobs there.

It also plans to educate up to 2,400 future farmers at no cost to them this year, an increase from the 1,925 people who were in that program last year.

The government will also focus on helping newly returned households establish themselves in rural life rather than simply encouraging more people to make the move.

The Agriculture Ministry plans to move the Return Farm Support Center, now located in Suwon, to Seoul by July.