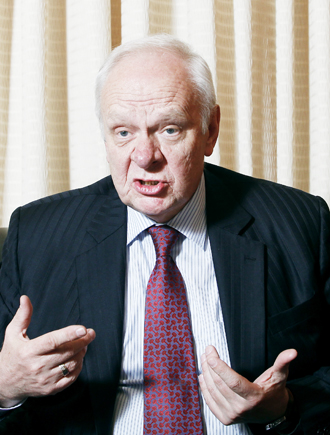 Responding to concerns that the crisis in Ukraine may lead to the biggest standoff in relations between the East and the West since the fall of the Soviet Union two decades ago, Russia’s top envoy to Seoul stated on Wednesday that Russia “does not want or need a new Cold War.”

“Sanctions are like two faces of the same coin,” said Russian Ambassador to Korea Konstantin Vnukov in an interview with the Korea JoongAng Daily and the JoongAng Ilbo.

He added that he received the news of the United States and the European Union implementing sanctions “with a heavy heart” after Crimea voted to break away from Ukraine to join Russia last weekend in a referendum.

“Sanctions is a not a 21st-century word,” Vnukov said. “Especially in the case of such a large country like Russia, it’s a term that can never be accepted. While it can seem to be a blow on Russia at first, other European countries also can also be impacted [by the sanctions]. So many European countries are handling the issue of sanctions on Russia very carefully.”

Russia generally brushed off U.S. and EU sanctions on Russian and Crimean officials after the Sunday referendum as being toothless. However, U.S. President Barack Obama and his European allies warned of tougher sanctions and diplomatic isolation.

Obama is expected to lead a meeting of leaders from the Group of Seven along the sidelines of a nuclear summit in The Hague next week to discuss the issue, according to the White House.

“The U.S., likewise, has a close economic relationship with Russia. If the U.S. imposes sanctions, the U.S. may also inevitably be impacted,” Vnukov said, adding that he doesn’t believe Russia will collapse because of such measures.

On Tuesday, President Vladimir Putin and Crimean leaders signed a treaty to make Crimea and Sevastopol part of the Russian Federation, which is pending ratification in Russia’s parliament. Putin on the same day stated that the referendum in Crimea on Sunday showed the overwhelming will of the people to be reunited with Russia. His speech received standing ovations at a joint session of parliament in the Kremlin.

Korea’s Ministry of Foreign Affairs in a statement on Tuesday said it does not accept the referendum in Crimea or Russia’s annexation of the peninsula from Ukraine, urging the “sovereignty, territorial right and independence” of Ukraine be respected. But “in Crimea, these people freely voted, without pressure from the military,” Russia’s top envoy said.

He compared the situation in Ukraine with the Japanese government preventing Koreans from using their native language or names during its occupation of the peninsula(1910-1945). “Kiev’s behavior is similar to Japan’s behavior in regards to Korea during that time,” he added.

“If you were there and could see the people’s faces, they looked happy. These people were so joyous, they had tears in their eyes,” Vnukov said regarding the referendum, in which more than 96 percent voted in favor of joining Russia. Turnout amounted to about 82 percent of the electorate.

The ambassador pointed out that the total population of the Crimean Peninsula is 2.2 million, of which 1.5 million are Russians. “What I want to emphasize that hundreds and thousands of people there have requested Russia’s help,” Vnukov said. “I also want to emphasize that in the Crimean Peninsula, there has been no bloodshed. But Kiev and other Ukrainian regions have seen bloodshed.”

In regard to reports that a Ukrainian serviceman was killed when a base held by Kiev came under attack - the first death in Crimea from a military clash since Russia seized control three weeks ago - Vnukov cautioned to “be wary of such reports, as they are disguising people to look like Russian soldiers.”

Media reports said the attackers had been wearing Russian military uniforms. The interim government in Kiev responded by authorizing its soldiers in Crimea to use weapons to protect their lives.

Vnukov added that the government in Kiev “seized power unfairly through a coup d’etat and is showing constant acts of violence and armed violence.”

However, he noted that the issue was still close to his heart, as he was born in Ukraine.

Drawing on 41 years of service in foreign affairs, he suggested that issues in Ukraine could be solved one way: “A huge constitutional reform, so all Ukraine’s regions and people can be represented in the government. That may calm down the situation.”

Meanwhile, international experts on North Korean affairs have expressed concern that the crisis in Crimea could have an impact on the situation on the Korean Peninsula, including a freezing of Russian-American cooperation on the denuclearization of Pyongyang.

“The Korean Peninsula issue is not a theoretical problem, but a real problem. In reality, North Korea’s nuclear program affects the security of our people. If North Korea fires a missile, if it makes a mistake, since we don’t know what direction it will fly in, it’s an important problem.

“For the North Korean nuclear issue to be resolved, the security of all the involved nations has to be guaranteed, including North Korea,” Vnukov said.