After years of waiting, the flashy, aluminum-clad Dongdaemun Design Plaza often referred to by passersby as “the giant spaceship” opens today.

Now the question is whether this grandiose plaza, which cost 484 billion won, or $452.6 million, can properly fulfill its purpose of benefiting the public and becoming a cultural design space enjoyed by all.

While industry experts and architects have argued over the building since the ambitious design by Iraqi-British architect Zaha Hadid was chosen by the city in 2007, all seem to agree that the quality of the contents inside the Dongdaemun Design Plaza, or DDP, will determine its legacy.

With four floors above ground and another three below, the building has 85,320 square meters, or 21 acres, in floor space. That space is divided into five sections - the Art Hall, Museum, Design Lab, Dongdaemun History and Culture Park and the Design Market. It also has a rooftop garden.


According to the Seoul Design Foundation, the division of the city government in charge of the project, the Dongdaemun Design Plaza will be open to the public 24 hours a day (the main building, not the exhibition halls) and allows citizens to “experience diverse exhibitions and design products as well as the latest fashion trends” under one roof.

So what can visitors expect to see here?

To start off, there are eight exhibitions going on, including a showcase of highly treasured Korean traditional artworks from the Kansong Art Museum. Hadid is also holding an exhibition titled “Zaha Hadid 360 Degrees” starting today in the lobby of the Design Experience Zone; this exhibit will be expanded with more works by Hadid and move to the International Conference Hall on April 4.

Other exhibitions opening today include the “Design Sports Exhibition,” which displays a history of sports products and equipment in the Design Exhibition Hall; “Design Allegory of Enzo Mari Toward Utopia,” which features the designs of Enzo Mari, an Italian modernist artist and furniture designer, in the Yigansumun Exhibition Hall; “Ulm Models - Models After Ulm: Ulm School of Design 1953-1968,” which explores the design philosophy and history of the school in Gallery Mun.

But the highlight event for many is surely Seoul Fashion Week, which starts today and runs to March 26.

That’s a good start, but there is not much else coming for the rest of the year to the sprawling complex, which perhaps is not enough to keep it alive.

“All the contents are the result of careful consideration for many years,” said Park Sam-chul, director of the exhibition department at the Seoul Design Foundation.

“We’ve thought deeply about what kind of contents to fill up this building since the establishment of this foundation in 2009.

“We’ve made a few changes, like changing the purpose of the Design Museum. We first thought about showing the industrial development of the design industry, but since we had the opportunity to invite the Kansong Art Museum, we’ve made alterations.”

There’s no doubt that the exhibition by the Kansong Art Museum features many Korean treasures, but some have criticized it for being so discordant with such a futuristic building. Yet Park thinks differently.

“It’s true that the building is modern and Kansong is from the past. But we believe we all learn from our past to create the future, which is why we wanted to start with Kansong,” said Park.

Although there are criticisms that the building is just too big, too UFO-like and too out of character with the historic character of the area, local architects are largely positive about the outcome.

Mihn Hyun-jun, a professor at Hongik University’s School of Architecture and the person who designed the Seoul branch of the National Museum of Modern and Contemporary Art, said that he believes the design plaza “is the best architecture designed by Hadid.”

“There are criticisms about the high cost,” said Mihn. “However, the outcome has perfect completeness, artistically speaking. It did cost a lot, but that’s the price we had to pay for Hadid’s design.

“It’s time for this country to have something new and fresh.”

Unlike Mihn’s museum, which had a clear purpose from the get-go, for the design plaza, “the form came first, then came the purpose,” he noted.

While the building itself is all about unity and smoothness, construction was anything but.

The project was initially planned by former Seoul Mayor Oh Se-hoon in 2007 as part of his “Design Seoul” catchphrase.

Oh had several big-concept projects at the time, including the Floating Islands in the Han River, which did not turn out so well. Dubbed “Oh’s white elephant,” the 139.2 billion won cultural landmark has only been used once for a Fendi fashion show in June 2011, which was held as part of the island’s inauguration.

As for Dongdaemun, the site of the design plaza was the home of a famous old sport stadium for decades. But Oh decided something more modern was needed. After gathering public opinion, Oh organized a competition with eight world-renowned architects. Hadid’s ambitious plans won and a deal was signed with the Seoul Metropolitan Government. The old sports complex, which faced closure in 2003, was demolished in 2008.

The first problems arose when historical artifacts were discovered under the site. Before construction could continue, all the old remains had to be carefully excavated, a process that took a year.

Along the way, the price tag ballooned from an initial budget of 200 billion won to 484 billion won, generating more criticism.

Then the mayors changed in 2011 with the election of Park Won-soon, which led to another round of delays and changes. In 2012, Park overturned Oh’s original plans for a design-themed building and rebranded the plaza as “a place for citizens and local merchants as well as international tourists” - once Park was convinced the design plaza was not just a “mere display,” construction resumed.

During the press conference with Hadid at the DDP last week, Park said, “although former Mayor Oh began the DDP project, it’s also my project as well. The task now is how to utilize this masterpiece with great contents and that is my responsibility.” 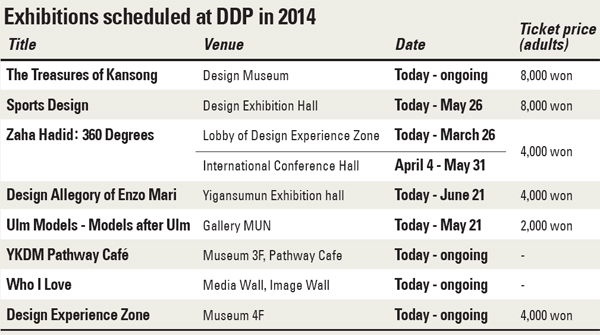 After Park decided to allow clothing merchants inside, that led to criticism that the design plaza might turn into just another large shopping center, only fancier. But Park emphasized that his repurposing would save money on operations.

“The initial plan [of Oh’s] would have entailed spending 32 billion won annually on operations,” said Park. “But to make sure no more taxpayers’ money goes into this building, we’ll make sure the building makes revenue.”

Thirty-two shops are opening inside the Design Lab, mostly selling fashion items and accessories. More stores selling, food, beverages and design items also open today along the Design Market, which is on the way into the Plaza in a 24-hour section.

Today, a frustrated public is complaining that they don’t know the purpose of the giant building.

“I hear there’s going to be exhibitions inside that thing,” said Kim Ki-jeong, 53, who operates a dress shop next to the plaza. “We’ll know about its attractiveness when it fully opens to the public, but I doubt it’ll draw enough people to keep the place bustling and active.”

Park Mi-jin, 29, another local vendor, is also skeptical. “After Seoul Fashion Week, how are they going to attract people?” she asked.

A lack of parking is also a problem. Although the building is connected to the Dongdaemun History and Culture Park Station on subway lines 2, 4 and 5, the building has only 350 parking spaces.

It also has just 27 bathrooms, which some criticize as far too few for such a gigantic building.

But officials at the Seoul Design Foundation point out that there is plenty of parking at other sites nearby, and that there are additional bathrooms outside the building.

“Such criticisms about a lack of parking or bathrooms are too feeble,” said Mihn. “It’s not a perfect comparison, but around the Eiffel Tower in Paris there’s one restroom and hardly any parking, but people still go and enjoy the landmark.”

As it is just the first day of the Dongdaemun Design Plaza, experts say it’s too early to know how it will turn out and whether it will become an iconic landmark.

“DDP is magnificent enough to attract people for its appearance,” said Mihn. “Providing great contents will of course be better.

The Floating Islands is a failure because it failed both in the architectural aspect as well as in purpose. In that aspect, DDP is a success.”