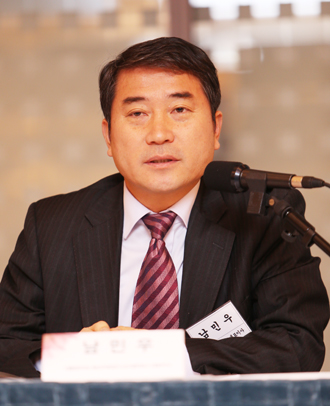 The government should boost start-ups by encouraging entrepreneurship through business education starting at a young age, not by simply allocating more money or opening new infrastructure, said a group of start-up experts yesterday in Seoul.

The Korea Leaders Forum, hosted by the National Academy of Engineering of Korea at the Westin Chosun Hotel in central Seoul, looked at business start-ups as a way to lower youth unemployment, investigating what can be done to encourage more young people to try creating their own companies.

The four panelists were Nam Min-woo, chairman of the Presidential Committee on the Young Generation and the Korea Venture Business Association; Kim Ran-do, the best-selling author of “You Are Suffering Because You Are Young” and a consumer science professor at Seoul National University; Park Jea-gun, electronic engineering professor at Hanyang University; and Charles Pyo, founder and CEO of Wizard Works.

Although the employment rate for all age groups rose to 64.4 percent last year, in part because of President Park Geun-hye’s effort to get to 70 percent, all four experts agreed it is still a difficult time for young people between the ages 15 to 29. In fact, the youth employment rate was just 39.7 percent during the same period, the first time is had dropped below the 40 percent mark since the 1997-8 Asian financial crisis. Over the past decade, the number of entry-level jobs for young job seekers shrank 1 million.

Nam noted how the local conglomerates have lost interest in hiring new college graduates as a major reason for the downturn. With much of the world’s economies going slow, Korean conglomerates have concentrated on growing abroad, which does not lead to many hires back at home. They also have displayed a strong preference for finding experienced workers from competitors.

In addition, the low salaries and poor working conditions at small and midsize companies have contributed to some young people trying to found their own businesses, encouraged by a government campaign to become entrepreneurs as part of the push for 70 percent employment.

Hanyang University’s Park contended that young people first need to be educated about the entrepreneurship spirit, given that there is almost nothing about it now in the Korean education system. He felt that spirit would help young people develop the passion and strong mind-set needed to recover from failure, which is a personality also preferred by conglomerates. In addition, he suggested that it is better for youngsters first to build expertise in a subject area through working in a field, before beginning their own start-ups.

Pyo, 29, who first started his start-up at the age of 15 and is now a veteran entrepreneur, contended that entrepreneurship education should start from early childhood, noting that curiosity and perseverance cannot be fostered instantaneously.

Citing his own childhood, he added that the education system should be reformed first to implant the habits of creation.

“The government should instead give young people chances to experience creation,” he said.