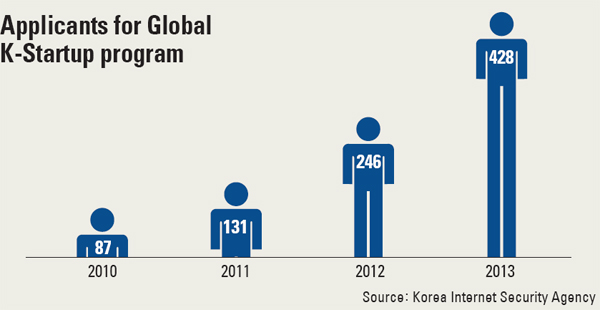 NHN’s mobile messenger app Line is not the only Korean product attracting popularity in Japan and other places in the world. Local IT start-ups are increasingly seeking success in Japan, which has a mobile market seven times as big as Korea’s and the widest customer base for paid content in the world.

It’s becoming essential for local start-ups to penetrate foreign markets to grow, and Japan is the preferred overseas market compared to the relatively small Taiwanese, Singaporean and Southeast Asian markets, which do not have large customer bases for paid mobile content yet.

Smart Pass is a closed app market that offers 900 paid apps recognized for their quality. All were created by Japanese IT companies before SomNote. It’s the first foreign app to be introduced by Smart Pass.

Each of the 8 million subscribers to the Smart Pass pays 372 yen ($3.63) per month to use any mobile app, and the app developers get paid according to how many people download them.

Wizard Works plans to create new revenue from regular upgrades to the app.

As part of its strategy, it will provide Japanese language services for Japanese customers.

The company was on a roll after it introduced a widget service in 2008, but then the Internet environment abruptly changed from the Web platform to a mobile platform.

“We are delighted to have made into Smart Pass after nearly one year of knocking on the door of the Japanese market,” said Pyo.

“By introducing SomNote 2.0, which has been getting good response from domestic users, and other apps, we will further improve the company’s status in Japan.”

Another mobile application company, Malangstudio, said on Jan. 24 that its mobile application AlarmMon ranked No. 4 of all apps and No. 1 for lifestyle apps in the first 24 hours after its official launch in Apple’s App Store in Japan.

AlarmMon is one of the most popular apps in Korea, Japan and China, providing mobile alarm service with characters such as Kkokkodaek, Darknyang and Ppangya. The users must play a game or complete a mission to turn the alarm off.

It has received 5 million downloads in China and is expanding its reach to Indonesia and Brazil.

It ran a booth at an IT exhibition in China. After aggressive promotions in China and building up its networks, China’s No. 3 smartphone maker Xiaomi picked AlarmMon as a recommended app, and the company teamed up with a business that owns famous characters in China.

In Japan, Malangstudio also consulted with local Japanese experts through the help of the Korean government after conducting a beta test of the app.

Now, the start-up is in the black two years after the launch of the app. It has had more than 8 million downloads of AlarmMon in domestic and foreign markets. With a growing number of users, advertising revenue has expanded along with sales of paid characters.

Malangstudio set a goal to achieve 1 million downloads in the Japanese market in the first half of the year and to team up with famous Japanese characters.

“Although Korean start-ups are very competitive, they should not blindly enter the Japanese market thinking it has a similar culture to Korea’s,” said a spokesman for NIPA. “They must calmly decide whether their products will work for Japanese consumers and keep in mind the distinctive business culture in Japan that emphasize trust as much as the feasibility of a business.”

The photo editing app maker JellyBus has 30 million users around the world and Samsung Electronics is working with it.

JellyBus is a Korean start-up founded by 34-year-old Kim Se-jung. Out of 30 million users of its app, Korean users account for only 10 percent.

The recently launched photo editing app for Apple’s iOS, Rookie, ranked No. 1 in terms of downloads in app stores in 90 countries, including the United States, China, Japan and the United Kingdom.

The health care mobile app Noom was chosen one of the top 10 Android apps by the New York Times in 2011. Noom, which has 20 million users around the world, manages people’s diets.

Noom was founded by 34-year-old Chung Se-joo in 2006. Chung established the start-up when he was a sophomore at college in the United States After succeeding there, Chung built local branches in Korea, United Kingdom, Germany and Japan.

As IT start-ups expand overseas, more young people are interested in entrepreneurship targeting the global market and the government is responding.

The Korea Internet Security Agency said the number of entrepreneurs who applied for the Global K-Startup, a program that helps start-ups going overseas, increased from 87 in 2010 to 428 last year.

The Ministry of Science, ICT and Future Planning launched the Startup Alliance on Tuesday to boost the ecosystem for start-ups and support them to expand overseas through public-private cooperation.