Loan fraud suspect told the world of his wealth

Loan fraud suspect told the world of his wealth 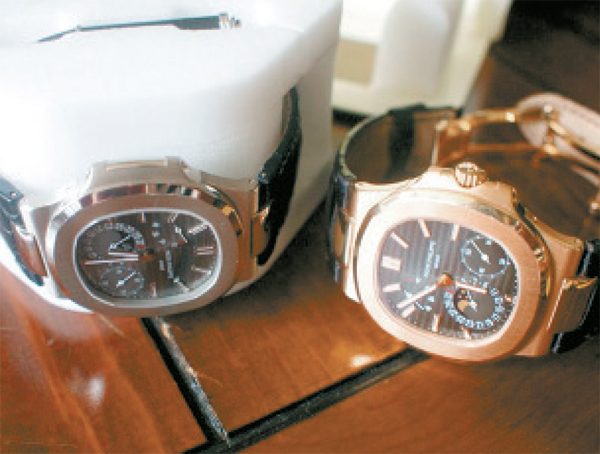 A captured photo of luxury watches uploaded by Jeon Ju-yeop, chief executive of NS Soul, who is allegedly involved in the KT ENS fraud case.

While it is officially known that the recent massive loan swindle by an employee of KT ENS and its subcontractors was uncovered by the Financial Supervisory Service (FSS) during its bank credit monitoring process, photos of luxury watches and car keys on social networking sites were found to have also played a significant role in the investigation, according to an industry source familiar with the investigation. In February, the FSS found that about 300 billion won ($279 million) in loans had been issued by local banks to a company that was set up by the KT unit’s subcontractors.

A KT ENS employee surnamed Kim contributed in the loan fraud by repeatedly issuing fraudulent documents such as accounts receivable to these subcontractors in exchange for cash, helping the subcontractors receive massive unwarranted loans which were later diverted.

A leading suspect in the fraud is Jeon Ju-yeop, the CEO of NS Soul, a contractor of KT ENS. He reportedly uploaded dozens of pictures of expensive luxury watches and car keys he had acquired as a result of his dealings to online community sites.

Jeon had been living a luxurious life, and allegedly bought a Mercedes-Benz for Seo Jung-ki, CEO of Joongang T&C, another supplier and subcontractor of KT ENS. Suh is also allegedly involved in the loan swindle.

The source said that Jeon pretended to be the scion of a family-owned conglomerate, purchased watches worth tens of millions of won for some employees during overseas business trips and often boasted about his networks in the financial industry.

As he continued boasting and posting photos of Rolex and Omega watches on the Internet sites, his online acquaintances began to get suspicious and reported their concerns to the police, the source said.

Chun, 49, fled Korea to Hong Kong on Feb. 6, then to New Zealand on Feb. 7 and to the South Pacific island of Vanuatu on Feb. 17. The police are trying to track him down and have asked for help from Interpol.

Meanwhile, according to sources in the Financial Supervisory Service, the director of the savings banks inspection team, named Park, was questioned by the police on two occasions about his relationship with the head of an office in the service’s capital market research team. The latter official, named Kim, is suspected of helping Jeon flee the country by tipping off Seo Jung-ki to the investigation.

Park allegedly informed his co-worker, Kim, about the progress of the investigation on Jan. 29 and Feb. 3, according to the police, who are reportedly investigating whether Park’s information was provided in return for cash or other considerations. But the FSS does not plan to open disciplinary proceedings, believing it much more plausible that Park, who uncovered the massive loan fraud at KT ENS through the FSS monitoring system in February, had simply replied to Kim’s questions without knowing about the latter’s relationships with the subcontractors.

Kim of the FSS had maintained a very close relationship with one of the main suspects, Seo, received 30 percent of the shares of a farm from him, and went on a golf trip to Philippines together with him. Kim, accused of having helped Jeon escape overseas, was forced out of his position.