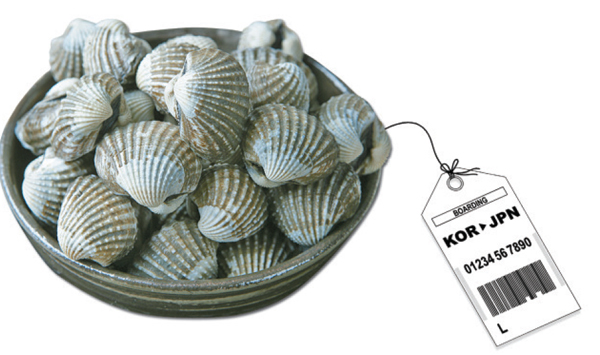 Earlier this year, the Ministry of Trade, Industry, and Energy announced that exports by small and medium businesses were 33 percent of Korea’s total exports in 2013, whereas exports of the top 50 corporations accounted for 61.1 percent of the total. Although President Park Geun-hye stressed last August that it was important to help smaller firms export, only one-third of the nation’s exports come from that sector, and nearly 75 percent of those smaller firms had export volumes of less than $500,000.

The CEO of Beolgyocodfish, Seo Hong-seok, 46, has been farming ark shells, a type of saltwater clam, in South Jeolla for the domestic market for 20 years. Being an industry veteran paved the way for his success.

“Most of the people assume that it takes only a few months to culture cockles, but actually they need three full years before they can be served on the table,” Seo said. That long timeline means that one- or two-year-old cockles are often ruined overnight when there is a natural disaster like a red tide or a typhoon. “After a night of typhoon winds, fish farms turn into a sea of tears. There are a lot of fish farmers who quit because of the pressure of knowing that the business can go bankrupt overnight,” Seo said.

One of his Japanese acquaintances advised him to process cockles and sell them because processing allows them to be table-ready after only two years. In addition, radiation concerns in Japan meant that imports from non-contaminated areas could prove to be a good business. Seo established a company and prepared to launch his product at the Foodex Japan exposition in Tokyo. He also invested 400 million won ($370,000) to hire three experts in processing cockles.

“I wandered all around Japan for a year, persistently trying to persuade several buyers, and finally succeeded in exporting,” Seo said. So far he has exported 200 tons, $3 million worth, of the mollusks. He is planning to invest another 3 billion won to build his own processing plant, and will buy neighboring fish farmers’ two-year-old cockles and process them for sale. “We are projecting 10 billion won in sales in 2015,” he said happily. “We are continuously developing products and will show the world their quality.”

Eagle Vet is the first domestic manufacturer and distributor of animal health products to enter the African market. While the majority of domestic companies have given up on African markets, Eagle Vet took the risk to go there.

Eagle Vet was established in 1970. It showed double-digit growth annually in Korea as cattle and poultry farming grew, but it suddenly reached a plateau in the beginning of 1990 because of growing competition and market saturation.

The company turned its attention to the international market, Africa in particular, where enterprises from the Netherlands occupy the majority of the market. Given that Africa has a large livestock population, the company saw a promising market. The animal medicine manufacturing industry in Cameron is a 100 billion won business; it is more than 500 billion won in Ethiopia.

The chief of Eagle Vet’s foreign division, Kim Seung-ho said, “Since Africa has poor infrastructure in the animal medicine manufacturing industry, steady growth is feasible once we establish ourselves there.”

Korean pharmaceutical products are 20 percent less expensive than European products and 20 percent more expensive than those from China, and are well appreciated in Africa. Eagle Vet held a “Buyers’ Day” for its African buyers, built an office in Kenya and plans to build additional offices in Nigeria. It aims to increase its exports to $400,000 dollars in a few years. “We are planning to actively target markets in Africa with our 40 years of experience in the business” Kim said.

Chungho Com Net has had a role as a domestic company specializing in the field of financial automation. When most businesses were not even thinking about exporting to Iran because of trade sanctions by the United States and Europe, it began exporting ATM parts. The company signed an $80 million contract with Pebco, Iran’s largest ATM manufacturer, in December.

The entry of Western firms was blocked because of the sanctions, and Chungho Com Net took full advantage of the situation and was successful.

The annual demand for ATMs in Iran is about 65,000 units, but supply is less than half of that number. Iran’s population is twice that of Korea, an indicator of potential demand, and the poor quality of Iranian banknotes is bad, leading to breakdowns and a need to replace machines comparatively frequently. Kotra explained, “More than 10 percent of ATMs are replaced annually.”

Chungho Com Net plans to target Pakistan, Afghanistan, Eastern European countries and Russia in the near future now that the company is well-placed in Iran, a country where the West and the East meet.