Tastes in restaurants are changing

Tastes in restaurants are changing 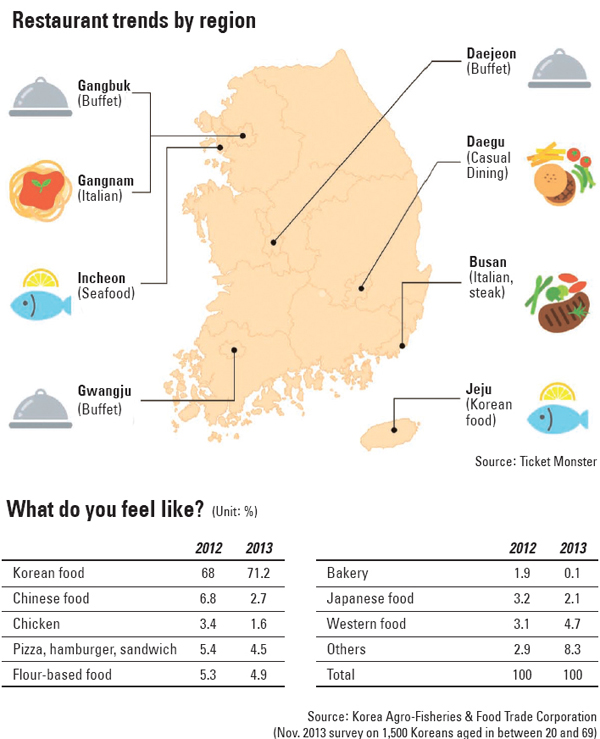 Park Hyun-min, a 33-year-old employee of a chemical company located near Gwanghwamun, central Seoul, has a special role in his workplace. Park is in charge of finding the restaurants that he and his team gather at every month after work.

Past company outings were all about grilling samgyeopsal (pork belly) and drinking soju. But these days, Park says his team prefers buffets. His co-workers want various food options, he says.

There is one other change Park has seen in his role as a restaurant scout. He’s using a lot of coupons from social commerce sites, which helps the team save money.

“A few restaurants on social commerce websites offer 50 percent discount coupons,” Park said “I arrange team gatherings at those places and spend the cash we save for coffee or a movie night later.”

For his mastery of social commerce sites, Park has been given a nickname in the office. He is called a master of “cou-tech,” which is a portmanteau of “coupon” and “investment techniques.”

Like Park, many young people are using discount coupons from social commerce websites. And this has provided data on changing trends in young people’s preferences in restaurants.

According to data released by Ticket Monster (T-Mon), a social commerce website, in 2012, an Indian restaurant chain called Agra was the most popular among coupon-seekers, getting the highest sales in the Gangbuk, or northern Seoul, area. The restaurants with the second- and third-highest sales were also Indian.

In the following year, however, a restaurant called Under the Sea buffet ranked first in sales. In the previous year, it wasn’t even in the top three of the list.

“Buffets have become popular,” said Kim Chun-sik, vice president of the local business group at T-Mon. “Coupons are bought in chunks - more than 10 all at once - which shows that people are purchasing them for get-togethers after work.”

Kim said that given that 80 percent of T-Mon’s users are in their 20s and 30s, it’s estimated that young people are opting to eat at buffet restaurants.

“People prefer to spend money more rationally,” said Kang Byung-oh, a professor at Chung-Ang University. “That’s a trend that emerged because of the recession.”

The popularity of eateries, however, differed by region.

In the Gangnam area in southern Seoul in 2012, the most popular coupon was for meals at Canadian Lobster. In 2013, the Italian restaurant JK Kitchen ranked first with over 500 million won ($460,000) in sales. This restaurant became popular after its chefs appeared on TV as masters of cooking pasta.

“We should pay attention to the housewives living in the Gangnam area and their consumption patterns when eating out,” said Shin Bong-sup, who teaches restaurant business at Kyung Hee Cyber University. “The young housewives are the main consumers who reside in Gangnam and they share information about neighborhood restaurants - whether the place is run by famous chefs, use fresh ingredients, and more.”

In Busan, meanwhile, the top 10 restaurants in 2012 were all buffets. In 2013, Italian restaurants called Wiki and Bonappetit ranked first and second in sales. Roughly 80 percent of coupon buyers for the two restaurants were women in their 20s to 30s.

“Big shopping centers have become places for young people to meet with their friends, dine together and go shopping,” said Kim from T-Mon. “This brought about greater sales for restaurants located in shopping centers.”

In the port city of Incheon, the top five restaurants in 2013 were seafood places, including the most popular restaurant, Star Fish, with 200 million won in sales. Yet in 2012, the fusion buffet Galade7 ranked first.

Casual dining places stood out in Daegu. In Daejeon, a low-cost buffet restaurant, Robins, was No. 1 in 2013 with nearly 600 million won in sales.

In Daejeon, there was a 50 percent increase in restaurant coupons sales in 2013 - 3 billion won in total - which showed rapid growth in the dining-out culture. The most popular restaurant in Gwangju for two years in a row was a buffet, while regional cuisine was popular in Jeju.