‘Noah’ amazes with spectacle, but light on Bible

‘Noah’ amazes with spectacle, but light on Bible 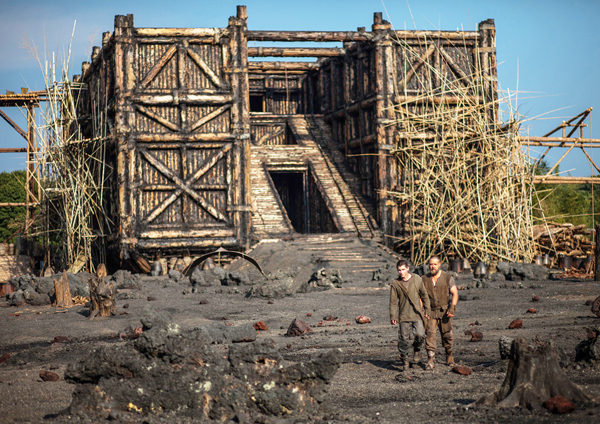 Darren Aronofsky’s “Noah” has been criticized by many Christian test audiences in the United States for its differences from the Bible tale. Provided by Paramount

“In the Beginning There Was Nothing” - and so starts Darren Aronofsky’s film about the iconic biblical figure and his ark. With an introductory narration that comes off a tad offensive to the faithful, from just a few seconds in, “Noah” is set to irritate many fervent believers.

And truly, that’s just the beginning. Oddly enough for a movie based on the Bible, God is referred to as “He,” “The Creator” or “Him.” And while the dictions do bring a sort of neutrality that could in theory bring in audiences from all walks of faith, most of the time it’s just downright distracting and the effect of “he who must not be named” gives the film a sort of comedic sci-fi feel.

There are also creatures that no amount of time in Sunday school would have prepared you for and fabrications that would have your head spinning if you were expecting an accurate retelling from the Good Book.

But this is where you have to remember that, like it or not, the U.S. film comes with a disclaimer, after test screenings on Christian communities complained about the non-biblical changes (the distributor says it will not include the disclaimer in Korea).

But this is where viewers need to remind themselves that this is the work of Hollywood and it comes with a price tag of $125 million. A typical retelling wasn’t in the cards.

Aronofsky, who is known to be an atheist, had said that he made the film for both believers and non-believers. But as the controversy surrounding the film proves, it might sit better with the non-religious or those who go in without expecting the story to unfold like the Bible describes.

Russell Crowe as Noah presents an interesting casting choice. It’s hard to dot the lines between the hero of “Gladiator,” the man who scuffles with the paparazzi and the most faithful and obedient man in the Bible. But again, this Noah is the Hollywood version, and perhaps somehow more relatable than the real one.

Although for the most part a peaceful guy, Crowe’s Noah is a chronic doubter, hater and at times a legalist who would be willingly to give up his family to carry out the will of God, with much self-loathing, of course. And given the immensity of the task, it’s probably a normal reaction.

Then there is his brood: the source of his drive and anguish.

Jennifer Connelly plays the faithful wife, Emma Watson is the adopted child Ila who becomes Noah’s daughter-in-law, and Anthony Hopkins plays Methuselah, the wise grandfather of Noah. All are interesting, but not as much so as the protagonist.

The emotional roller coaster that Noah rides out as he hears, then does not hear, and hears again from his Creator, is what makes the film watchable. That and the visual depictions. From the dreams to the process of building the ark, the scenes are captivating, just as you’d expect from the creative mind behind “Black Swan.”

And while some have accused the film of having a more environmental agenda - and the environment does at time seem to take precedence over, say, the Bible - it is regrettable that the “two of every kind” that made it onto the ark go mostly unseen.

At times it’s hard to decipher what part of the movie you should relate to and what part is just an amazing spectacle to behold without any thought.

While it’s hard to deny that Aronofsky has indeed taken a lot of liberty with the original script, at the core of this tale is a conflicted man who tries to communicate with and serve a God he doesn’t come close to understanding as a mere mortal. And isn’t that the recurring theme of the Bible?